Lady Gaga posed for Harpers Bazaar magazine in underwear, fishnets and facial horns. She also revealed that she believes the spirit of her friend, dead fashion designer Alexander McQueen, is “guiding” her.

During the interview, Gaga claimed that Alexander McQueen – who committed suicide last year – was looking down from the sky and guiding her career, perhaps even penning her single, Born This Way.

“I think he planned the whole thing. Right after he died, I wrote Born This Way,” said Gaga, who released the track exactly a year after his suicide.

“I think he’s up in heaven with fashion strings in his hands, marionetting away, planning this whole thing.”

Gaga went as far as saying that McQueen should take all the credit for Born This Way. 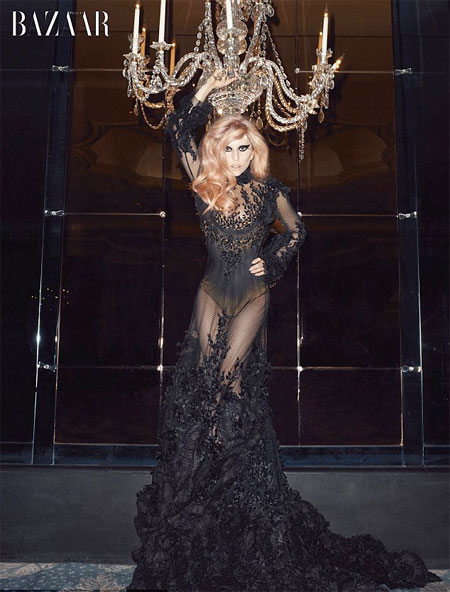 Gaga pulled off a number of dramatic looks for Harpers Bazaar May edition and in each wore prosthetic cheekbones, her current trademark.

Explaining the face horns, Gaga said that for her they were preferable to cosmetic surgery.

“I have never had plastic surgery, and there are many pop singers who have,” Gaga said.

“I think that promoting insecurity in the form of plastic surgery is infinitely more harmful than an artistic expression related to body modification.

“I am an artist, and I have the ability and the free will to choose the way the world will envision me.”

New York girl Gaga also revealed that she found it impossible to fit into Hollywood life in LA, comparing her reaction to a vaginal expulsion.

“I had all these number-one records, and I had sold all these albums, and it was sort of this turning point: Am I going to try and embrace Hollywood and assimilate to that culture?

“I put my toe in that water, and it was a Kegel-exercise vaginal reaction where I clenched and had to retract immediately.

“I ran furiously back to New York, to my old apartment, and I hung out with my friends, and I went to the same bars.”

You can read the full interview and see Lady Gaga’s shoot in this month’s Harpers Bazaar US. 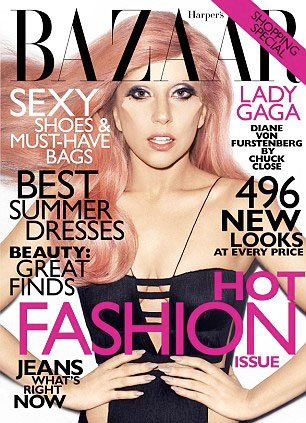 Lady Gaga on the cover of Harpers Bazaar May 2011.