The Tour de France 2014 is starting in Yorkshire. Yes, Yorkshire. The 101st Le Grand Départ will be in Leeds on July 5. Competitors will then thread their way across the Yorkshire Dales to York, down to industrial Sheffield and via Cambridge and London before crossing the Channel to France.

Yellow bikes and bunting adorn the streets in preparation for Stage One and Stage Two of the race. Leeds is all very well, but is like any other major city. If you’re visiting this end of the country, spending time in York will give you a true taste of what it’s really like to be in God’s Own Country.

Stage Two of the race hits the history-bound city on July 6, and there are many things to do (apart from watching the competitors zoom by, of course).

First up are the three must-do elements. You can’t visit York and not do these:

The Shambles is so called because it used to be the butcher’s street and the wide windowsills (which are still there) were known as ‘fleischambles’, where the wares were displayed. It is also the most complete Medieval shopping street in Europe. As such, it looks like the inspiration for Diagon Alley: it is crowded and cramped and knobbly underfoot. Go early, unless you’re a fan of being crushed.

York is built on chocolate. And cholera pits. But mostly chocolate. Try the hands-on history at the York Chocolate Story in King’s Square or make your own truffles at the York Cocoa House.

You’re still thinking of those cholera pits, right? York is known as the most haunted city outside of London. Whether you’re a believer or naysayer, the ghost walks are well worth the fun. For a fiver you get to nosy around the city and hear some of the best ghost stories around. If you do this on your first night, it’ll also help you navigate the rest of your stay. 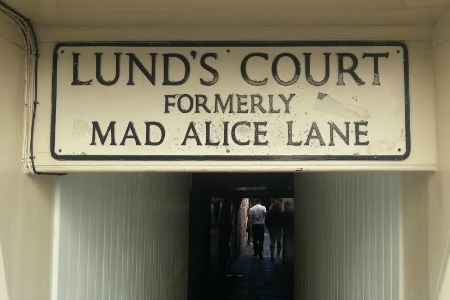 With the tourist essentials covered, here are a few hints from a local lass on the best hidden spots:

Drink at: The House Of Trembling Madness. Yes, that is the actual name. With a wall dating to 1180AD, shored by ship beams over 800 years old, it looks like a shop at street level, with over 400 different types of beer available for purchase. You can either purchase and walk out – or take it to the bar upstairs, where you will come face-to-face with some of the strangest stuffed animal heads and friendliest locals.

Draught beers and local ciders make up the majority offerings of the bar, while the sociable setup means you’re likely to end up sharing a table.

Eat at: Crumbs cupcakery on Goodramgate. Not only the most delicious cupcakes in town, but they also make a great range of gluten-free ones too. The white chocolate and pistachio cupcake comes highly recommended. Sitting in the shadow of the historic Minster in a quiet square, it’s a peaceful stop perfect for people-watching. The shop is teeny-tiny, and has limited outside seating space, so best to get there for a cheeky brunch at 10am or around 2pm before the afternoon tea rush.

Listen to: everything! York is infamous for its busking scene, and the weekend of Le Tour will be prime time for some of the brilliant bands on offer. With a key flavour being the return of guitar bands and 90s indie pop, you just need to take a walk around the centre to hear the talent – keep an eye out for veterans The Glass Caves, King No One, Everlate and Bull for an audio feast.

If you get lost, walk out from the centre. In under ten minutes you’ll come to a city wall and boom! Just follow it around until you get back to a familiar bit. If nothing seems familiar? Eh, you’ve had a scenic walk on the most complete Roman city walls in Europe. If someone says to go up a snickleway, they’re not being rude. York’s full of them. They’re very narrow alleyways that are like secret passages for shortcuts and tourist avoidance. Look out for Mad Alice Lane on Low Petergate as a prime example.

Don’t mimic a Yorkshire accent at a local. You’ll offend everyone, unless you know the differences between the accents of York, Leeds, Hull, Middlesbrough, Barnsley, Sheffield, Whitby… just don’t do it. They’re a proud bunch. You might want to brush up on the lingo, too.

Author bio: Imogen Bell is a freelance writer, music glutton and sometime cyclist (though won’t be competing
in Le Tour any time soon). You can follow her on Twitter @Im0genBell or read more musings at
imogenbellwriting.com.

Smith, Logie into Round 3