In the midst of a sweltering 40-degree heat, the sizzling wind charges at me like a desert storm. The streets of Seville are now empty as businesses shut and activities come to a standstill for the après-lunch siesta. Here, in the capital of Andalusia, old habits die hard – whether it’s the napping practice, late-night tapas indulgence or bullfighting fanaticism. 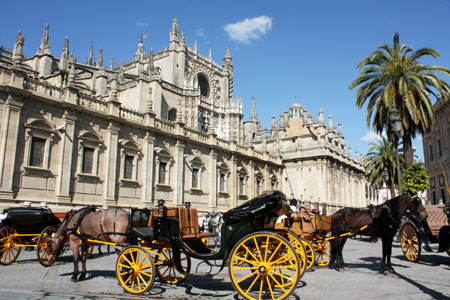 I’m here on a trip through Andalusia’s heartland, escaping the beach crowds and veering inland to get under the skin of Southern Spain. This region is the birthplace of flamenco, tapas and bullfighting – traditional practices tied strongly to the Spanish identity. And in the epicentre of it all stands Seville, a city framed by religion, history and tradition.

Rhythmic beats echo in the background of the studio. I watch, mesmerised by the powerful stomp and swish of my instructor. With her arms in the air, she moves her body with the elegance of a cheetah and stamps her feet with the energy of a bull.

I am here not just to watch Lourdes dance, but to learn her moves. Despite having zero musical talent, I’ve signed up for a one-week intensive flamenco course at Taller Flamenco, one of Seville’s most famous dance schools.

My interest in flamenco had peaked after catching a live flamenco show at La Carboneria on my first night in Seville. 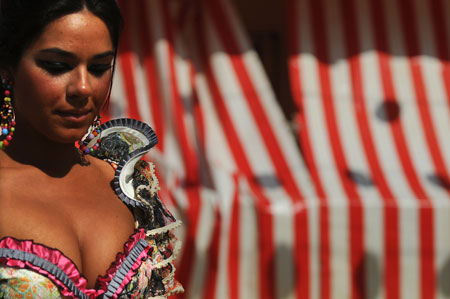 Carmen, a local friend, steered me away from the clusters of tourist traps to an obscure corner of the Santa Cruz district to show me the real thing. Housed in a cave, the flamenco tablao showcases performances from veteran artistes and draws in more locals than foreigners. The melancholic tune, the gentle strumming of the guitar strings and the pounding of the dancer’s feet against the wooden floor got me hooked.

Back in the school, we start with a brief introduction into the world of flamenco.

“There are more than 50 palos or flamenco music styles, but the most popular ones are the bulería: happy, high-spirited style; soleá: sad and melancholic; and the seguiriya: tragic, extreme sadness,” say Lourdes says.

Heaving a sigh of relief, I’m glad we’re not learning all 50 of them. Lourdes continues to show us the compás y palmas, a rhythm unique to flamenco. You clap the tempo with your hands – how hard can it be?

After a few tries, I’m beginning to doubt if I can master flamenco in one week, or a lifetime for that matter.

To get our feet up and our hips swaying, Lourdes first gets us to work on different parts of our bodies. We start with rotating our hands in a graceful-yet- invigorating manner, then whirling and stamping our feet in a sequence of rhythms. They’re easy enough but once we combine the two, our inability to co-ordinate results in a series of giggles. 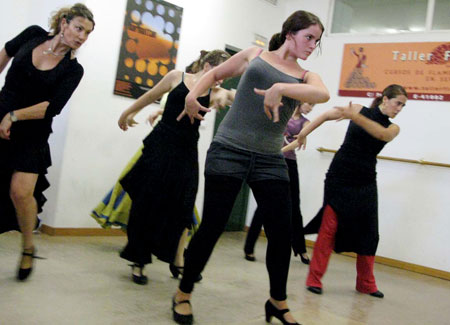 “Siente la musica. Feel the music – with your heart,” Lourdes says with much seriousness.

“In flamenco, emotions play the most important role; we need to let the music flow through our blood before we can express this sentiment to our audience.”

I close my eyes while stamping my feet to the rhythm of the music and, for a second, I know what Lourdes means.

First created by the ethnic gypsies in Andalusia in the 18th century, flamenco music has since had Moorish, Jewish and Western European influence. Today, most famous flamenco artistes are gypsies, and many of them from this region. Flamenco is still very much alive in Andalusia and can be heard in most traditional festivals in the region. Taller Flamenco co-founder Eukene Izagirre tells me that the school was set up 10 years ago to cater to the growing interest in flamenco dance across the world.

Our group of eight students in Lourde’s class are drawn to the traditional performing arts for different reasons. Anna from England is a ballet dancer; Mariko started dancing flamenco back in Japan and is here for deeper immersion; while Una from Ireland wanted to go beyond the tourist trail. By the end of the course, we all leave with a twinkle of aspiration – determined to continue pursuing flamenco when we get back home. Although we barely scratched the surface of flamenco in the short span of one week, we know that this is just the beginning of our journey.

On a tapas hunt

It’s 9pm and the streets of Granada are only starting to buzz with activity. By now, I’m no stranger to the late eating hours in Andalusia – dinner at 10pm and party ‘til dawn.

This charming city is almost half the size of the capital, yet double the fame. As a major university city, Granada is best known for its youthful vibes, affordability and rich tapas culture.

On a typical weekend, young Granadinos start their night off with a series of tapas-bar-hopping before partying the night away. To experience living like a local, I head out on a tapas bar crawl with Go Granada! 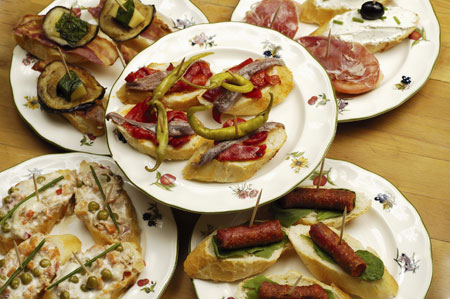 “There’s just so much variety here, whether you’re after traditional flavours or modern cuisine. Tapas can range from generous portions of paella to a platter of chorizos and blood puddings to small stylish canapés,” my guide Lucy Valantine says.

Food is one of the main reasons why Lucy has chosen to call Granada home. Having lived here for three years, Lucy organises guided tapas tours to share her knowledge.

We begin our culinary journey at Bodega Mas Que Vinos with a glass of Rioja wine and a tosta de jámon (cured ham on toast). Jámon is the holy grail of Spanish gastronomy, prided by Spaniards throughout the country. The dish is small and incredibly tasty, perfect to whet my appetite.

Lucy tells us how tapas were invented: “Decades ago, bar-owners used small dishes to cover beer bottles, preventing flies from getting in. Slowly, they started adding food to these dishes. Since ‘tapa’ means ‘cover’ in Spanish, the platters of side-dishes that accompany beer are known as tapas.”

At la Pataleta, we tuck into a dish of Spanish meat balls while slurping a glass of Jerez wine. The night continues to surprise with endless strings of tapas and tales – by the end of the tour, we leave with satisfied stomachs and dreamy thoughts about Andalusia gastronomy.

Just 20km outside of Granada City lies sprawling olive groves and dense pine tree forests – the trademark of Southern Spain. At the foothills of the tumultuous Sierra Nevada mountain range, I am surrounded by square-grid almond orchards, protected nature parks and a flurry of white-washed villages. Curious to explore every inch of the Andalusia back country, I’ve signed up for a one-day horse-riding experience with Los Alayos Equestrian Centre.

My instructor, Fernando, has a soecial tip for me: “Chicuelo is rather greedy, don’t let him stop to eat too often.”

Despite having been named after a famous bullfighter, Chicuelo is far from feisty – his gentle demeanour and sparkling eyes have already won me over. It’s my first time on a horse, yet after a few rounds I’m already feeling comfortable enough to get Chicuelo to trot. Our group of riders weaves through the stunning Dílar National Park in single file, leisurely traversing the rolling hills while admiring the picturesque landscapes. The two-hour route takes us through varying terrain: from earthy flat lands to gentle ravines and thick woodlands perched on highlands. 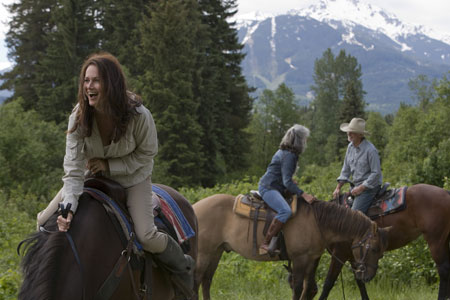 “I love the Andalusia countryside – it’s quiet, peaceful and authentic. It’s nothing like how my friends back in England imagine Spain to be,” says fellow rider Kate who admits to having the same impression of Spain before coming here – beaches, sangria and fiestas. But after getting to know Granada, she knows that it’s far from the truth.

By the end of the ride, all of us are buzzing from the dreamy experience. Fernando, who is originally from Castilla la Mancha in Central Spain, tells me why he moved here, “Look around you. Why would anyone leave this place?” I turn to see clear blue skies, yellow magnolias, brown parched earth and dark green olive plantations. Fernando might not be the only one to stay here forever…

When to go: April-May and October-November are the best time to travel for pleasant weather. Summer (June-Sept) sees temperatures of 40-45 degrees Celsius.
Getting there: Fly from Heathrow to Seville on Vueling (return fares from £114) or Gatwick to Seville on easyjet from £90.
Accommodation: Lodging in shared apartments can be arranged with Taller Flamenco for £110 (one week) to £280 (one month) per person.
Get more info: turismosevilla.org or andalucia.org

Man-made islands in the Solomons

How many kids can a South African teacher get in a Renault Clio? 19, but it’s not legal