Libyan rebels entered the heart of Tripoli this morning, meeting little resistance and signalling the end for Mummar Gaddafi. Rebel fighters marched into Green Square, Tripoli, as RAF jets bombed targets in and around the Libyan capital.

As rebels streamed into Tripoli’s Green Square they were joined by residents chanting victory slogans. Fighters fired celebratory shots as they tore down Gaddafi posters.

Libya’s ambassador to the UN, Ibrahim Dabbashi, told the BBC this was the end of Gaddafi.

“This is not the beginning of the end, it is the end,” he said, suggesting Gaddafi could be “replaced” by rebel officials “within a few hours”. 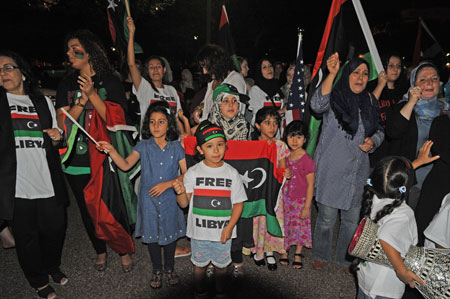 Rebels said the whole of the city was under their control except Gaddafi’s Bab Al-Aziziya-Jazeera stronghold.

Gaddafi whereabouts – and that of his senior officials – are still not known was but there have been reports that he is heading to Algeria.

The former Libyan leader’s two eldest sons have been captured by rebels. It is not yet known whether the prisoners will be handed over to the International Criminal Court (ICC).

Gaddafi's second son, Saif al-Islam, was taken into rebel custody on Sunday night. ICC had previously issued an arrest warrant for Saif al-Islam in June on charges of crimes against humanity.

David Cameron has cut short his holiday to chair a London meeting of the National Security Council for Libya.

“The first and most important thing is to make sure civil order is preserved, that there's food and power, all the things that people need to make sure their daily lives go on,” Burt said.

He continued that the National Transitional Council had “prepared well for this'', and that in other cities where it had taken control, stable rule had been established.

US President Barack Obama said on Sunday Muammar Gaddafi's rule was showing signs of collapse and called on the Libyan leader to relinquish power to avoid more bloodshed.

"The surest way for the bloodshed to end is simple: Muammar Gaddafi and his regime need to recognize that their rule has come to an end," Obama said in a statement.

"Gaddafi needs to acknowledge the reality that he no longer controls Libya. He needs to relinquish power once and for all."

Visit The New Forest for bike riding, canoeing and more