SPASH OUT ON THE HOME

❚ When things were good, boxing legend Mike Tyson spent £1.3m on a bathtub, which he bought for his first (now ex-) wife. It almost makes the £92,415 he spent on two Bengal tigers look like chump change.

❚ Seemingly level-headed Daniel Radcliffe once spent £11,251 on a custom-made Savoir mattress. Wonder how many gold Galleons that would be?

❚ Nicolas Cage once famously shelled out £182,455 on a dinosaur skull. Titanic actor Leonardo DiCaprio also had his eye on it, and it took a fierce bidding war before Cage won the beast at auction.

❚ Charlie Sheen bought a limited edition football table for £16,526. What made it so special? The players were made out
of Barbie dolls.

HOW YOU SPEND IT 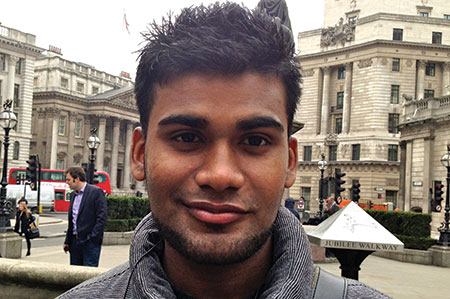 How do you budget?
I put funds into essential categories such as Oyster and phone before I put money into the miscellaneous one.

Do you have any tips for saving money in London?
I avoid posh lunches, and try to manoeuvre my Oyster so I don’t pay for zone one to four. I pay for zone two to four, then take the bus in zone one.

What non-essential items do you spend money on?
Electronics. I know I don’t need them, but I can’t stop buying the newest video games when they come out.

Travel on the cheap
EasyJet has deals on select summer flights. Book for travel between now and June 27, and you can get a one-way fare (based on two people flying) for as little as £45pp. Amsterdam, Nice and Milan are among the destinations going cheapest. Visit easyjet.com for more info.

Get your fridge on
Curry’s is having a spring sale on large appliances. White goods and more are up to 40 per cent off online and in stores. In some cases, that translates  to more than £400 in savings. Visit currys.co.uk for a list of deals.

Flee to gay parEE
Eurostar has a deal on train tickets from London to Paris. There are a select number of return fares on sale, starting from £69 (beat that, budget airlines!). The deal is on while seats last. To book yours, visit eurostar.com.

Get fresh-faced
Garnier is giving away free samples of face moisturisers. Simply visit garnier.co.uk, go to the pull-down menu under ‘Face’, click on ‘Moisture Match’, then click on ‘send me a free sample’. Give up your deets and it’s gratis.