Alastair Cook’s men capitulated before lunch on day five, clearly keen to get things over and done with and move on to working out how to not get flogged three times in a row in Perth.

Maybe they threw their wickets away in protest of catering facilities not agreeing to do their nutritionist’s million requested menus and didn’t want to put up with another  lunch.

England had to bat all day to save the Test, and with the covers on and off during the morning due to rain, it looked like there was hope in the clouds for them.

But play was only held up by 10 minutes and the weather cleared long enough for them to fold like tissue paper that had been used as the covers.

Their 10 second innings scalps fell to balls that wouldn’t have hit the stumps,  the preferred method being a top edge to fine leg or deep backward square. 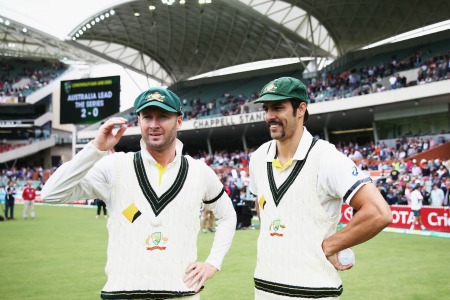 Australia hadn’t won a test in nine but now they’ve taken two on the trot, and in some style.

Stuart Broad and Matt Prior came out with bizarre intentions, treating their 531-run chase like a Twenty20 match.

Broad went early, from the third ball he faced, but not before smacking the second for six. He was caught at DBS and gave Banana Man Siddle a valuable wicket.

Graeme Swann, who threw his wicket away in the first innings to be one of Mitchell Johnson’s seven, limply edging Ryan Harris to Michael Clarke at second slip.

Prior seemed to be hitting his way into form and got his first 50 for 17 attempts, but on 69 he predictably top-edged Siddle to Harris in the deep.

Monty Panesar kept the day short and sweet when he pushed Harris to Chris Rogers at short cover. 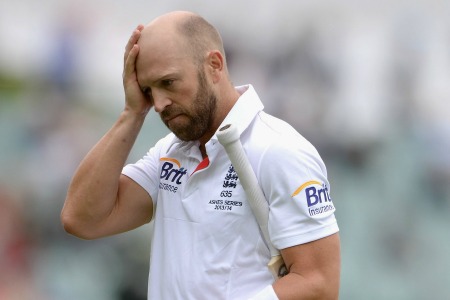 Johnson went wicketless on the final day, with Cook his sole victim – yep, top edge caught down there – meaning toilers Harris (3-54) and Siddle (4-57) got some rewards for their efforts. Lyon finished with 1-78 while Steve Smith was expensive with 43 runs off his 7 overs but his single wicket was a biggie – Ian Bell for 6.

Watson was the only wicketless bowler, but his six overs for six runs with three maidens show how valuable his bowling can be.

Johnson was again man of the match with his 7-40 in the first innings taking the game away from England entirely.

Not far behind him were Clarke and Brad Haddin, with 148 and 118 each when most others struggled to find runs on a supposed batsman’s dream.

A big job now for England to get up for Perth with Australia’s tails well and truly wagging.

A weekend in Edinburgh, Scotland