Live the Thai life, have an adventure

From my hotel balcony I can see the sleepy frontier town set low in a valley beside a calm, limpid lake dotted with longboats. Two gold temples jut out of the lush foliage on the mist-shrouded hills above. A towering, ramshackle bridge traverses the lake. It’s impossibly scenic, like an old Hollywood movie’s depiction of the exotic Far East. Hot, smelly Bangkok seems like a distant memory to me now.

From the capital we had travelled north-east and stopped overnight in Kanchanaburi, famed for its bridge over the River Kwai. The fast-running Kwai had been beautiful, and the town laidback, but the tourist-infested bridge was enough to make us want to flee into the jungle – which is exactly what we did. Peaceful Sangklahburi, 150km north of Kanchanaburi and a few miles from the Burmese border, fits the bill perfectly.

After a restful sleep, it’s time to get amongst it. We are now in Karen – pronounced ‘Callian’ – country where the people make up the largest of the major hill tribes of northern Thailand.

In this part of the world, it’s almost obligatory to have an elephant ride, and our hosts don’t let us down. But this being the tropics, it has rained overnight and our truck journey via slippery roads is a white-knuckle ride. It’s still drizzling when we climb on to our beasts and go tramping through the jungle before wading into a swollen tributary. My Indian elephant, Papoo, behaves impeccably and thankfully doesn’t start trumpeting wildly like some of the others when a group of Buddhist monks roars past in a motorboat.

A bit damp now, we congregate in the bamboo huts nearby and chow down on delicious hot kow pad kai (fried rice) served in banana leaves. When experiencing a country as beautiful as Thailand from the viewpoint of a pampered tourist, it’s easy to forget it’s a developing country with all the economic and social problems that entails. But we get brought back to reality with a stint of ‘volun-tourism’.

Our first port of call is Dream House, home to 35 children who are either orphans or have nowhere else to go because their parents can no longer afford to look after them. The kids, aged between three and 13, are excited to see our group arrive. With only a husband and wife team to look after them, they crave adult attention.

One boy, Jonathan, particularly pulls at my heartstrings – he has large, sad eyes and seems smaller than the other children. But he lights up when we play catch with him. 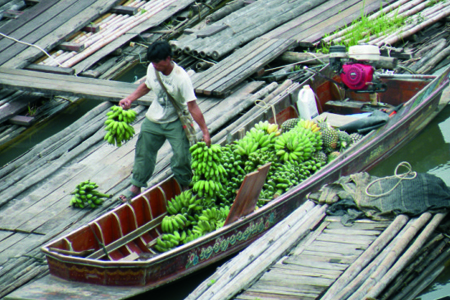 The grounds of the orphanage are spartan but there are plenty of games and toys around and the children seem happy and well cared for. In between playing games with them, the volunteers share their stories.

“I do a lot of volunteer work,” Amy Roskilly, 24, from London, says. “It’s the best way to see a country. You can go on holiday and see the tourist spots, but as a volunteer you can get behind the scenes and get to know the people and culture. There’s the tourist brochure, then there’s the truth.”

“I know it’s a cliché,” Madeleine Armstrong, 30, also from London, says, “But it’s good to be able to travel and to be able
to give something back.”

With the help of volunteers, the orphanage has installed electricity, running water and a house that sleeps up to five in a room, creating a family atmosphere. But there’s still more to be done: while we’re there, a group of young volunteers busily digs a drainage ditch. We spend the afternoon with the kids, but it’s time to move on. I can’t help feeling sad about their plight, and quiz the volunteer co-ordinators, Mark and AJ.

They assure me all the youngsters are happy despite their seeming lack of adult attention, but, equally importantly, they are safe: the border areas between Burma and Thailand are notorious for people trafficking. Children can easily be snatched and sold into prostitution or slave labour.

It’s shocking to hear this, and it’s clear the role of the volunteers is vital. Soon, we’re off on another adventure. AJ, Mark and a village elder – the only one in our group smart enough to wear wellies – attempt to take us on a trek to another one of their projects. It’s the site of a new water-pipe to the nearby village, and the trench will be dug by volunteers. But we don’t get very far. There has been so much rain that thigh-high pools of water block the path. Some of the more intrepid types plough on but give up in shame when they are quickly overtaken by a small boy; an elderly, cigarette-smoking woman; and a man on crutches.

We know we’re properly in the jungle now because the insects are scarily big and the sounds of crickets, frogs and cicadas create one cacophonous chorus.

That night, we dine at local restaurant Toys, where my tastebuds are tantalised by the spiciest food I’ve tried so far. It certainly set us up for a night of drinking and playing pool at a local bar. We spend probably too much time trying out the local whiskeys and rum, which aren’t as rough as we thought they might be but, even so, we’re feeling pretty messy as we stumble back to the Guesthouse in the early hours.

The next morning, slightly sore-headed, we climb a steep hill to another orphanage, Nuns School, run by a Buddhist nun. It’s not as cosy as Dream House, and the children seem more needy for attention and don’t have many toys. One little girl grabs my hand, clearly excited by the prospect of having some attention from a grown up. Others take our cameras and start snapping pictures of us and each other. All around is a hive of activity as volunteers busily plant vegetables so the kids will have fresh food to eat. Others are painting murals to make the place look more cheery. 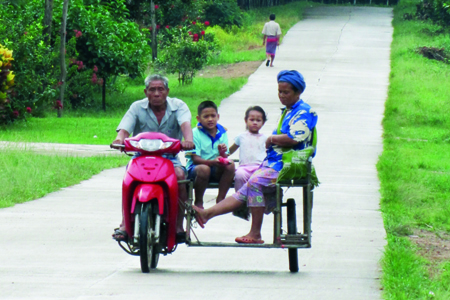 We wave goodbye to the children as we set off for our next adventure. It was supposed to involve whitewater rafting on the Song Kalia River, but the rain has made the rapids too powerful, so we go tubing instead. While floating down a river on the inner tube of a tractor wheel may sound lame, it’s brilliant fun – the sort of simple pleasure you experienced as a kid. Plus, with the strong current threatening to spirit us to Burma, it’s actually more of an adrenalin ride than I expected. Three of our party get carried so far downstream, they end up having to trek through the jungle with their tubes. Dressed in nothing but their swimsuits they scandalise a group of Buddhist monks in a village on their return.

Back on dry land, there’s an undeniable ‘ah-this-is-the-life’ moment, as I sip a Leo beer in a bamboo hut beside the river.
If you get sick of drinking beer, there’s always the local whiskey, Hong Tong – but it should come with a warning: too much Hong Tong can make you ting tong (that’s Thai for ‘crazy’) as we’d found out the night before.

Next, it’s time to explore Sangkhlaburi properly. The original town was flooded when the reservoir was built in 1984, and remains underwater, a bit like the original town of Jindabyne in Australia. It is a fascinating blend of ethnicities with Burmese, Karen, Mon, Thai and Lao people all living here.

It’s also home to the longest wooden bridge in the world which leads to the Mon Village of Wang Kha. The Mon people, who fled the oppressive regime in their homeland of Burma, now call Wang Kha home. Here you can get up close to the two gleaming temples known collectively as Wat Wang Wiwekaram.

Though Sangkhlaburi barely rates a mention in my guidebooks, there are signs it won’t stay undiscovered for long: the Haiku guesthouse behind our hotel serves flat whites and smoothies to a soundtrack of groovy lounge music – the Western influence is already creeping in.

A couple of the group sit, sipping our drinks on the terrace as some lazy dogs lie on the grass beside us. I had been anxious about rabies, which is meant to be endemic in this area. But while there certainly are packs of dogs roaming around, they are among the most placid, happy looking animals I’ve ever seen. That night we dine at the River Resort, where the menu is a delight of mangled English with dishes like ‘fish balls casually stabbed’. Not feeling adventurous, I pass, and instead plump for E-San soup from the region near the Thai/Cambodian border. Easily the hottest thing I’ve ever eaten, it nearly blows my head off. Still, it’s a fitting last supper in the jungle.

The best panini in Tuscany

Bennett rapt to have Buderus back in Newcastle