Living in Walthamstow, a groovy if gritty place to call home

Recently named by spareroom.co.uk as London’s best place to rent, ‘the Stow’ is no longer an inferior pocket of the capital. Increasingly within the sights of househunters who are reclaiming the east, it has emerged as a groovy, if gritty, place to call home.

It’s cheap, with the Global Financial Crisis to thank for its immunity from the gentrification juggernaut gripping north and east London, leaving renters to benefit from a ripple effect from the Stratford regeneration. Spareroom.co.uk was especially impressed with Walthamstow’s proximity to the City as it nominated it the area in London for value and convenience. It is also one of those rare urban corners framed by some serious countryside – Walthamstow Marshes, Lee Valley and Epping Forest, a hidden gem.

Mike Buniak, from Bairstow Eves in Hoe Street, explains Walthamstow is attracting young professionals priced out of the increasingly expensive property market. “People are migrating here from comparatively expensive markets in north London and Hackney, where prices are prohibitively expensive,” he says. “It’s got a balanced, ethnic community and is a reasonably pleasant area to live.”

Walthamstow is in Zone 3, served by the Victoria line at Blackhorse Road and Walthamstow Central, which takes 22 minutes to get to Oxford Street. National Rail from Walthamstow Central and St James Street gets you to Liverpool Street in a reasonable 20 minutes. Sean Hewitt, from Spencer’s Property in Hoe Street, says: “There so much in the way of night buses, which means young City professionals can stay out after work for a meal or enjoy a few drinks, knowing it’ll be easy to get home.” 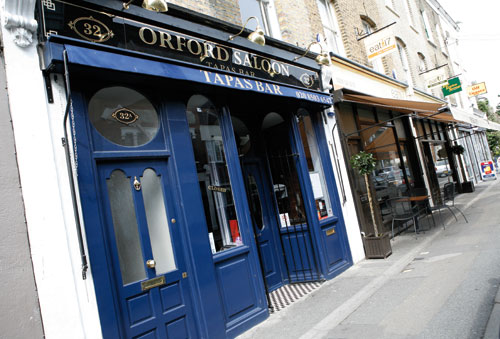 Walthamstow Village, 10 minutes from Walthamstow Central, is a sophisticated hub, with delis, organic food shops and charming pubs and restaurants, including Eat 17, which is making waves for its Brit fare (eat17.co.uk). Also try tapas restaurant the Orford Saloon (32 Orford Road E17 9NJ). There are also decent pubs on Wood Street and Coppermill Lane. During the day, stock up on fruit and veg for a steal at Walthamstow Market, Europe’s longest outdoor market.

And journalist Janine Kelso, 33, says: “For cheap vintage clothes, vinyl and antiques, I recommend Wood Street Indoor Market.”
Get lungfuls of fresh air at the marshes and canals – a wonderland for walkers and cyclists. Plus, the area’s central green space, Lloyd Park, has just been given a multi-million pound re-vamp and now has a skate park. Also steal on over to Lea Bridge Road for ice skating and horseriding.

The Warner flat is unique to Walthamstow and probably provides the best value, says Huseyin Sem, of Kings Group, in Hoe Street. “They are one-, two- or three-bedroom maisonettes, a majority of which can be found in the Lloyd Park area and around Blackhorse Lane,” he explains. More expensive, and smaller, are the Victorian Terraces, found in the Village area.
However, Bairstow Eves’s Mike Buniak warns Walthamstow’s property bargains won’t last much longer. “Prices will rise,” he says. “The trendy effect is bubbling out.”

What the locals say

Eleanore Robinson Journalist, 35: “Walthamstow is a little gem people rarely venture out of Central London to discover. At the heart is its vibrant street market and unpretentious cafes and pubs.”

Nick Daly Ops Mgr, 30: “It’s really easy to get to from the City, but far enough away so there’s peace and quiet when I want it – plus, I’ve got a garden with a barbecue, and that’s sublime.”

Pawel Kolat Software engineer, 34: “If you’re prepared to look beyond the grimness, Walthamstow has a really bohemian feel to it, as lots of artists and media types seem to be moving into the area.”

New band: The Guilty Ones – London-based purveyors of euphoric pop-rock

Revealed: what Aussie flyers love and loathe about flying