Luckily no one was harmed in the incident in Kings Cross and the London Fire Services have since brought the blaze under control.

Troy Rawhiti-Forbes of the New Zealand Herald was in attendance and praised Kiwi House’s staff for keeping calm and helping the 300 people at the event to evacuate.

New Zealand Olympic Committee spokeswoman Ashley Abbott said that no one was injured.

The BBQ fire at rear of Kiwi House is out. We’re cooling 2 cylinders that were involved in the fire. 300 people evacuated, no one injured.

“There were hundreds of Kiwis in there watching New Zealand’s hockey game and waiting for other Olympic sports to watch on the big screen,” said New Zealand Herald reporter Andrew Potter.

“Then completely without warning a barbecue at the back of the bar on the outside section of the bar appears to have erupted in flames and within seconds the entire pop-up bar was in flames sending hundreds of young Kiwis running out trying to get away.”

Kiwi House is part of scheme for the London 2012 Olympics wherein each country competing in the Games takes over a house where fans, competitors and their families can come together. 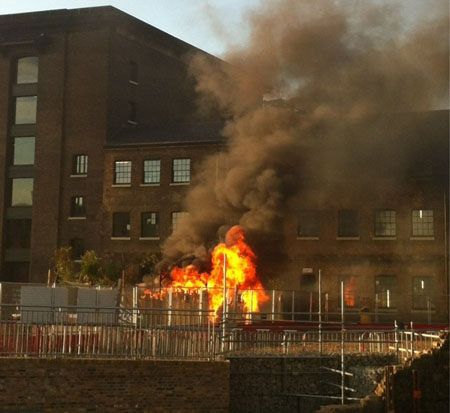 If you heard a bang in Kings Cross it was due to 2 gas cylinders exploding before we arrived at the BBQ fire at the back of Kiwi House, N1.

The Occupy movement has spread from New York across the world

Meeting the Dead in Port Arthur