London 2012: Calls for China and South Korea to be expelled from badminton tournament after trying to lose match

The Chinese pair of Wang Xiaoli and Yu Yang began to lose points intentionally in order to avoid playing compatriots Tian Qing and Zhao Yunlei until the final.

The referee warned both team, however his censure had little effect. The South Korean team eventually proved the less belligerent in the face of a cacophony of boos from the Wembley arena audience and went on to win the match.

As a result both teams in the next match, another South Korean pair and a team from Indonesia, also to lose their match in order to avoid China in the next round.

At one point in the second match the referee produced a black card, meaning disqualification for both teams, however his decision was soon rescinded after a protest. 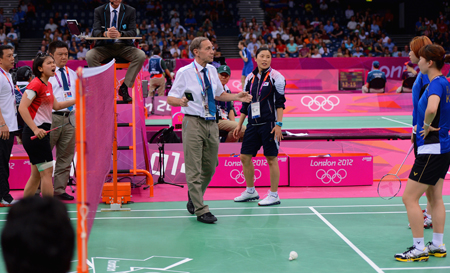 In the face of calls for all four teams to be thrown out of competition, the BWF have charged all four teams with ‘not using one’s best efforts to win a match’ and ‘conducting oneself in a manner that is clearly abusive or detrimental to the sport’.

South Korea’s coach Sung Han-kook blamed China for the incident: “The Chinese started this. They did it first”

“It’s a complicated thing with the draws. They didn’t want to meet each other in the semi-final, they don’t want that to happen.

“They should do something about that.”

China in turn said their tactics were simply in order to save energy for the later rounds.

Hospitality in The Park is Fred V and Grafix

Porcelain Crab, Mozambique Channel, Off the West Coast of Madagascar.

Across Bolivia’s desert of milk and tears