Ukhov achieved Olympics infamy in 2008 after a Youtube video showing him competing in Switzerland while drunk became understandably popular.

At the time, the Russian high jumper was given a “strong warning” from the IAAF for his behaviour.

However, yesterday the long-haired Olympic athlete was on form, clearing all his jumps to take the gold medal at 2.38 metres, the second-best in the world this year.

The London 2012 competition wasn’t without mishap though. Moments before he was due to jump, Ukhov lost his competition vest and was seen scrabbling desperately under a bench prompting a BBC commentator to quip, “I’d hate to see the state of his bedroom.”

Eventually Ukhov made do with a baggy t-shirt which he pinned his number to, regaining his composure and flying easily over the high jump. 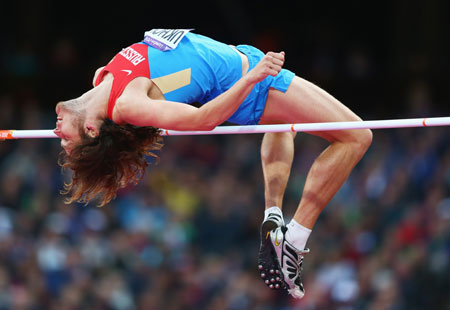 Bronze medal winner Britain’s Robbie Grabarz later tweeted: “I don’t have Ukhov’s shirt, but I do have an Olympic bronze!”

The gold medal win was a redemption for Ukhov who was slammed by his country after the video of his drunken Olympic attempt clocked up millions of views.

Valentin Maslakov, Russia’s head coach, said at the time: “By competing in such a condition he has disgraced all Russian track and field athletes.”

In the video of the Russian high jumper, Ukhov is seen having trouble removing his tracksuit and pushing aside a track official who tries to help. He then stumbles towards the bar, but instead of trying to jump, simply flops down on the mat.

At the time, Ukhow blamed his pre-Olympic boozing session on an argument with his girlfriend.

If you think that getting drunk and Olympic sport actually go pretty well together, maybe this is for you: drunkolympics.com

What you Need to Know About Bitcoin Code