Daubed with painted, wreathed in flowers and topless, the female protesters wore and carried slogans including  “Olympic shame” and “No Sharia” as they demonstrated outside London’s City Hall.

Ukrainian women’s rights group, Femen, which organised the protest said that it was a disgrace for regimes that treat women like third-class citizens to be included in the London 2012 Olympics.

“The Olympic Committee must not have allowed those governments to be represented in the Olympics. They are fascists of our time, they treat women like third-class citizens,” said one of the protesters. 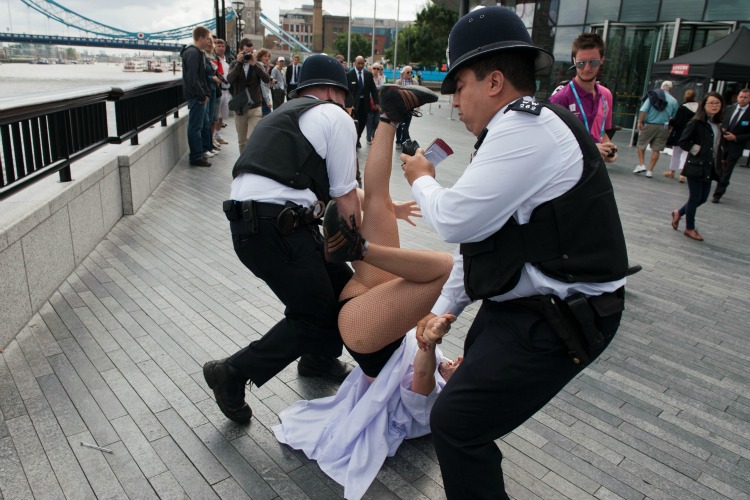 On Facebook, Femen posted a picture of five Olympic rings-coloured nooses and another in which the rings drip with blood. A statement read:

“Five French activists of Femen movement were arrested in London during the topless protest ‘Islamic marathon’ near the London Bridge.

“London police arrested two Femen activists once they arrived at the place, but three other sextremists took off their t-shirts and started to protest but afterwards they were arrested as well.

One user wrote: “There is a difference between islamism and radical islamism, such statments r just tasteless and completely racist. I’m sure femen had a lot of Muslim followers, not for long.”

Femen has staged similar topless protests across Europe, including one at football’s Euro 2012 tournament in Poland and Ukraine at which they were drawing attention to prostitution in host cities.

The Olympics protest continued for around 10 minutes, before police led the topless women away.

The Metropolitan Police said in a statement: “Four topless female protesters were arrested under section five of the Public Order Act for disorderly behaviour.

“They were taken to a central London police station where they were given a caution and later released.”

Not North West: Kim Kardashian sends fake baby pictures to ‘close friends’ to see who will sell the them to the media