Duck, goose, quail and beetroot-infused offerings, with kangaroo even making it on the ingredients list, will be among the samples.

The eighth Tatts-Con rolls into town with its sleeves up and its artwork on display.

There are 300 of the world’s most famous tattoo artists (including Miami/ NYC Ink star Ami James) with 13 halls to browse, ample ops to get some new designs and a schedule of out-there acts and performers, too.

The duo will collaborate for a one-off co-produced mural, and there will be a host of other new works by the pair on show in this east London exhibition, too.

The Glaswegian stand-up who crash-landed on the comedy circuit in 2008, climbing the ladder from small local halls to arena and DVD fame, returns for round two – The Story Continues – with this five-night stint at the Apollo.

Catch him while you can; next time round he’ll be doing the O2, guaranteed. 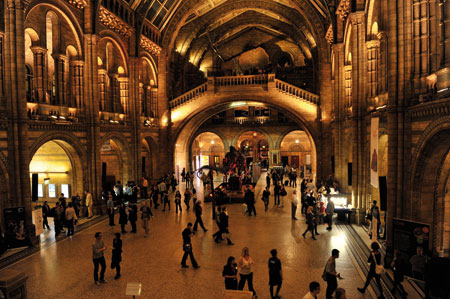 Three hundred of the museum’s scientists will be on hand to answer any and all of your questions as the Natural History Museum opens its doors for this late evening of science, education and cocktails.

The event allows the public to get their hands on artefacts such as prehistoric fossils and get behind the scenes in the labs where the work is done.

There will be seven bars, 19 science stations, and even a ‘virtual autopsy’, as science truly comes alive.

With their pearl-adorned ‘Smother Suits’, the Pearly Kings and Queens are as London as they come.

Their Harvest Festival today will feature music from marching bands, a special Harvest Festival service at St Mary-le-Bow church, as well as hordes of Pearly Royals dressed to impress, of course.

Hackney’s creative centre and hub of cool plays host to this summer kiss off party, which sees the likes of NYC production powerhouse Marc ‘MK’ Kinchen, garage star Todd ‘the God’ Edwards, and house/techno pioneer Paul Woolford on the decks, with food stalls and more. See the summer out in style.