London listings: take it back to the 90s

One of the neo- soul pioneers of the Nineties, up there with the likes of Aaliyah, Erykah Badu stormed on to the scene with single On & On in 1997. Her debut album, Baduizm, went triple platinum and she won Grammy Awards in 1998. Badu, who, incidentally, has a child, Seven, with Outkast’s Andre 3000, has released five albums since. The veteran’s polished performance and vocal talent, which has been compared to Billie Holiday and Aretha Franklin, will have you transfixed.

The legendary club night that began in the underground bars of Dalston champions Nineties R’n’B. Its nights have had the glorious titles of Busta vs Missy, Whitney vs 2Pac, Snoop vs Lil Kim and Mariah vs LL Cool J. The next night, on April 21, is Work It’s 4th Birthday.

This monthly Camden club night at The Jazz Cafe celebrates all sorts of Nineties musical gems – from super-stonking Britpop numbers to the most unashamed pop gems, plus dance, indie and hip hop classics. The word here is simple: ‘Ninetiestastic’.

As part of the Period Rooms And Gardens exhibition, showcasing interiors since the 1600s, the Geffrye Museum has created a loft apartment, circa 1998. It’s all very Friends – there’s even a huge Nineties TV
and VCR.

The Big Lebowski Quote Along

This Prince Charles Cinema event isn’t your usual film screening. First, it’s a quote along and second, it’s fancy dress. Fans of 1998’s The Big Lebowski are encouraged to come wearing their dressing gowns, and drink at a bar selling White Russians. Movie buffs will also be tempted by a spot of competitive bowling, to win a Prince Charles Cinema dressing gown. For those who don’t know, The Big Lebowski is about The Dude, a pot-smoking bowling freak who gets mistaken for a millionaire by a gang of thugs. This gets him caught up in a kidnapping black comedy debacle of epic proportions. It’s become a cult classic.

The Nineties Room at the British Music Experience

Giving visitors a look at the past 60 years of British music history, the BME has a room dedicated to 1993 onwards, with boyband nostalgia and a display of outfits worn by the Spice Girls, including Ginger’s Union Jack dress. And on the website, there’s a Spotify playlist for the era, too, to get you in the zone.

A heady mix of music and video games, this Throwback Arcade Night, held at Bloomsbury Lanes, will play all the best indie, grunge, rock, pop and hip-hop from the Nineties, plus a live set from The Detours. But that’s just the start – there’ll also be a selection of classic games from a selection of classic 1990s consoles, including eight-player Bomberman on the Sega Saturn, four-player Mario Kart and Goldeneye on N64, Sonic on Megadrive and a hell of a lot more retro gaming greats. The karaoke rooms will also have a mix of tunes you can belt out like a true Nineties kid. 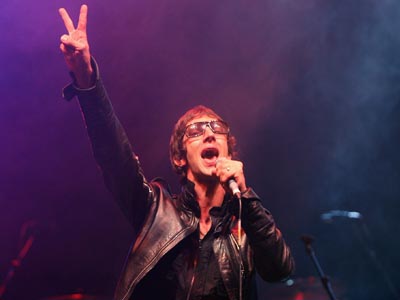 How (not) to make it in britpop

Playing Glastonbury, fan letters and walking barefoot for album covers – musician turned comedian Rosie Wilby shares the emotional rollercoaster that was chasing stardom at the height of Britpop. As documented at the time in Rosie’s Pop Diary – her column in the now defunct Making Music Magazine – expect bizarre, laugh-out-loud anecdotes, such as the time her house burnt down and she had to play a gig in an old Brownie uniform.

The cult vintage store has tons of cheap Nineties finds – deck yourself out in an outfit your mum would’ve dressed you in as a kid, but way cooler, obviously, because it’s become retro.

Pump up the volume

Don your denim jackets and hi-tops: this night at Visions Video Bar is dedicated to Nineties hip hop, house and pop. They love the likes of Whitney, TLC and Jazzy Jeff – the tunes that always get you carving up the dancefloor. Sign up to receive updates

Oh, what a lovely recession

The aim is to forget how bad the economy is with burlesque and Nineties nostalgia.

The Nineties was the decade of raving, dance music and the infamous club drug, Ecstacy. The movie version of the euphoric highs and devastating lows depicted in Irvine Welsh’s 1996 book entitled Ecstasy: Three Tales of Chemical Romance is out this week. Lloyd, played by Adam Sinclair, spends his life partying and getting trashed, funded by smuggling jobs for  a local drug boss. But when he meets Heather (Kristin Kreuk), he has to figure out if he’s in love with her, or if his feelings are chemically induced. He decides he has to escape, but not before one last trip. Club kids will also love the movie’s banging dance soundtrack.

Out on April 20
Cinemas across London
ecstasymovie.co.uk

Rewind back to the 90s

Add a splash of Nineties chic to your outfit – a crop top or a denim jacket, perhaps – and head to Rewind, at the Shadow Bar inside Leicester Square’s Empire Casino. Dance until the small hours to some of the best 1990s tracks imaginable – think Ebeneezer Goode by The Shamen, Sit Down by James, Ice Ice Baby by Vanilla Ice and MC Hammer’s ultimate tune, U Can’t Touch This. And the DJs take requests – as long as they’re suitably Nineties. Party on.

Relive the iconic movie of the Nineties, with key moments such as the steamy-car-hand-swipe scene, the naked drawing and the “king of the world” bit in full 3D splendour. We wonder if it’ll make the iceberg look any more menacing?

Out now
Cinemas across London
odeon.co.uk