Ballot results for the London marathon 2012 are in and not everyone who applied to run in the iconic – and gruelling – race will have won a place. But don’t fear if you’ve been unlucky, many charities are offering Golden Bond marathon places in return for a set sponsorship pledge.

Since the London Marathon began in 1981, more than £500 million has been raised for charity. In 1993, the Golden Bond scheme was introduced, offering charities five marathon places each year for five years.

More than 600 charities are part of this scheme, holding approximately 13000 places annually between them.

As the ballot results came in, many charities took to Twitter to advertise their marathon places.

Here’s a full list of all the charities with Golden Bond places: virginlondonmarathon.com

Charities with places on the London Marathon 2012 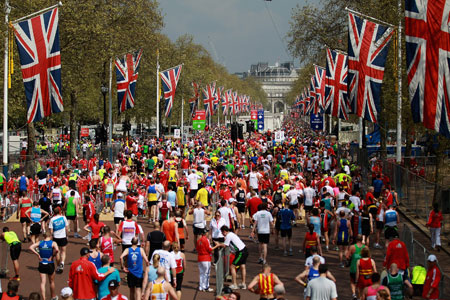 Fight global poverty as you run for Oxfam, which promises participants a personalised vest, running advice and a team of support. You’ll need to raise £2000.
oxfam.org.uk

Train with double Olympic gold medallist Daley Thompson, visit a Barnardo’s project and have access to a VIP recover centre (yikes) on the day of the race. There’s also a pre-marathon past party!
barnardos.org.uk

Help fund research in breast cancer and become part of the charity’s All Stars team. You’ll be given a bright pink running shirt and can be sure of lots of cheers from the crowd. £1750 is the minimum pledge required.
microsites.realbuzz.com

To run for this hospice charity, which supports those coming to the end of their lives, you’ll need to raise £2000 in sponsorship. IN return, you’ll get free merchandise, a training pack, a training run and breakfast on the day.
helpthehospices.org.uk/marathon

The partner charity of Plan UK, Interact Worldwide are offering Golden Bond places to raise money to help prevent the spread of HIV and AIDS in communities across Africa and South Asia. You’ll need to secure £1,700 in sponsorship.
plan-uk.org

In aid of those with genetic disorders, this charity has places for runners in the London Marathon. You’ll be helped out with fitness and fundraising advice and will be given a complimentary place to run the Adidas half marathon in March 2011 as a warm up for the marathon.
jeansforgenesday.com

Raising money for international health projects – particularly in disaster-struck regions – Merlin UK has places for runners able to pledge £1800. You’ll get one-to-one running support and an invitation to the post-marathon party.
merlin.org.uk