London scene: the best film, theatre and comedy this week

Film: How I Spent My Summer Vacation

After his ill-advised adventures in sexism and race relations, it’s good to see Mel Gibson back on screen without, relatively, much baggage. His latest, Summer Vacation, is an old-school B movie which is, mostly, pretty darn good fun.

Gibbo is Dick Johnson (geddit?), a career criminal who has fallen on tough times. He winds up in a Tijuana jail, where he puts his conman skills to the test to secure his own freedom and survival.

It’s Mel doing his wisecracking wrong ‘un and he’s back to his best, outfoxing, outmanoeuvring and outmuscling his inmate compadres and with the script’s twists and turns moving things along nicely right to the end. It’s far from a classic, but goes some way to restoring Mel’s big-screen clout, and reminds us just why we loved him in the first place.

The first film was a tongue-in-cheek remake of the Eighties killer-fish flick, which had Richard Dreyfuss in a half- assed pisstake of his iconic Jaws role. David Hasselhoff spoofs his Baywatch days here, as this remake/ sequel turns it all the way up to ridiculous, and then some – as its bra-bursting title suggests. Still, if homicidal fish are your idea of cinematic heaven, you’ll love it.

Theatre: Written on the Heart

Sparked by a conference on the impact and legacy of the King James Bible held four years ago, David Edgar’s erudite new play – told as an imagined encounter in 16th-century Britain over the Bible’s role and importance –  is well-researched but, though admirable in many ways, makes for rather dry and ‘worthy’ theatre. LK 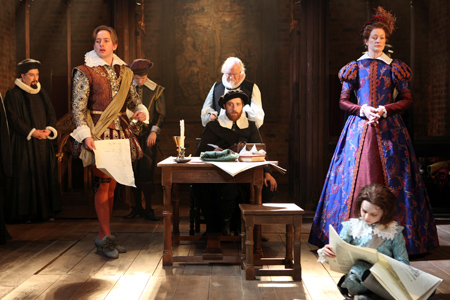 Film: Jeff, Who Lives at Home

Jason Segel, writer-star of Forgetting Sarah Marshall, and Ed Helms, Hangover guy who lost teeth and got his face tattooed, star in this warming comedy about two brothers.Segel is the slacker seriously lacking direction, and Helms his misinformed but ultimately well-meaning brother, as they spend a day together finding each other, and themselves.

War veterans, tsunami-ravaged derelict towns, raindrops, broken and bruised faces, and a young man from Argentina who recreated an old photo snapped of him as a boy in speedos and sailor’s hat – just a handful of the winning images at this year’s competition, on view for two more weeks only. Will make you go ‘wow!’.