You best bring your game face as this one-day dance fest is set to push it – and you – all the way. With a massive line-up spread across five arenas, it will keep you dancing the rest of the weekend. Holland-born DJ Fedde Le Grand and Mark Knight (above) are the main stage co-headline hosts. Fedde forged a reputation as one of the biggest names to emerge from the Dutch house scene, and has established himself as a force to be reckoned with through residencies at some of the world’s most prestigious, influential and essential clubbing institutions.

He’ll be joined by Knight, whose Toolroom Records has scored been the house DJ at Ministry of Sound, and in Ibiza, Miami, Frankfurt and New York. Knight’s worked on recent output by Faithless and Underworld, and scored himself a Grammy nomination for his work on the Black Eyed Peas’ The E.N.D. Ms Dynamite will bring her urban sounds, and Aussie drum ‘n’ bass outfit Pendulum hit Saturday night with a DJ set.

Also featuring will be disco-house sensation Maceo Plex, recently nommed as one of the top five DJs in the world; Miguel Campbell, a veteran of the UK house scene; dubstep and drum ‘n’ bass chart smasher Sub Focus; alongside MistaJam and drum ‘n’ bass legend Fabio. “We’ve got an obsessive passion for what we do. It’s about attention to detail: the artists, the sound, the visuals, the quality of the experience,” festival director Daniel May says. “This year is going to be special.”

Celebrate culture and fashion from the 1920s to the 1980s against the backdrop of a gorgeous Northamptonshire stately home. Sergio Mendes, Aloe Blacc and St Etienne are among the acts, with ‘vintage’ nightclubs including Let It Rock (guitar culture), Leisure Lounge (Sixties-themed), Soul Casino (Seventies Northern soul) and Torch Club (music and fashions of the Twenties, Thirties and Forties). There’s art, craft and design workshops, film screenings, the Chap Olympics, and the Vintage Funfair, too. Unique festival glamour!

The Cambridge, NZ-bred garage punks broke out with their 2002 self-titled debut, then recorded a follow-up with Led Zep’s John Paul Jones, and found a fan in Lars Ulrich. Now prepping the yet-untitled fifth album, the gang’s back in the UK, with a warm-up show in London before their Hop Farm appearance on June 30.

There’s electro-tinged live acts, house, techno and disco, DJs, and an aura of ‘don’t fuck!’ cool at this weekly east London night. If you get down early, you get in for free, but at a mere fiver after 10.30pm, this ace night is a steal. Get down and cut some shapes to some truly top tunes. 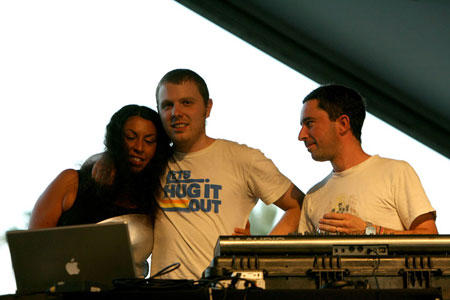 The sweeping, genre-stradling, complex-yet-accessible oeuvre of Jason Swincoe’s ‘orchestra project’ is a beguiling proposition on record, as they blend jazz, indie and dance, with soundtrack accompaniment and, as the name suggests, movie images. Live, though, they are quite another thing altogether.

This summer party sees Koko transformed into a picture of English traditionalism – floppy hats, cricket whites – with a host of pop pleasures to guide you through the night, including DJs Sean Rowley and Anna Greenwood, live music from The Lipsinkers, cabaret and burlesque troupe The Dreamboats, and more.

This travelling fest celebrating music of African roots moves to London from Rio, with an all-star line-up. I Try soul singer Macy Gray, who returned this year with Covered (featuring takes on tracks by the likes of Radiohead and Metallica), headlines the Friday, Roots Manuva the Saturday and Gilberto Gill the Sunday.

This 16-hour party on the banks of the River Lea in east London boasts the best in UK and German house, featuring Amé, Sven Weisemann (above), BNJMN (Live), Kowton and more. There’s no noise restrictions for the outdoor section of the bash, which moves indoors at 11pm, so expect mental mash-up madness. Will you be able to keep up?

Band to watch: Said The Whale

The buzz so far: In the five years since ‘The Whale began, they have made a handful of albums of infectious pop-rock brilliance, been the subject of a documentary and won last year’s Canadian Juno Award for Band of the Year. Upcoming long player Little Mountain sees them unveil 15 new tracks that veer from sweet pop and jagged-rhythm indie, to rocking-out jams, with the harmonious thrust of dual vocalists Tyler Bancroft and Ben Worcester. Canada’s biggest export are, rightly, about to make waves.
The Critics say: “Said The Whale’s strength is their ability to marry catchy hooks with a roots-music tradition. ” MusicEmissions.com
The plug: Little Mountains is out July 2 through Hidden Pony Records.

Shia LeBeouf blames his Broadway arrest on too much whisky

The best doughnuts in London