A lunar eclipse last night – turning the moon blood red – was the longest and darkest in more than a decade, lasting for 100 minutes in its totality.

Throughout Europe, Africa, Asia and Australia astronomers were able to watch the lunar eclipse, although in Britain cloudy skies obscured the view. 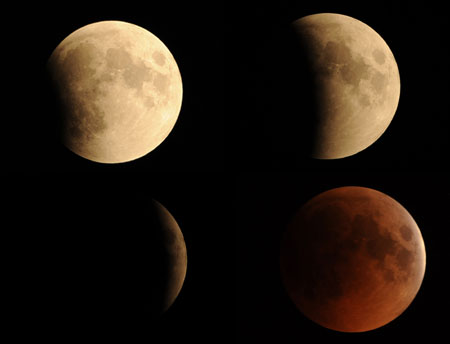 A combination of pictures shows differents stages of the moon during a total lunar eclipse in Gaza.

The eclipse was made even more dramatic by ash in the atmosphere from a Chilean volcano, which made the moon appear blood red.

According to scientists a “deep lunar eclipse” like last night’s often appears coppery.

The intensity of the moon’s colour during such an eclipse depends on the amount of ash and dust in the atmosphere. Last night, the level of ash from Chile’s volcano meant that the moon turned a vivid red. 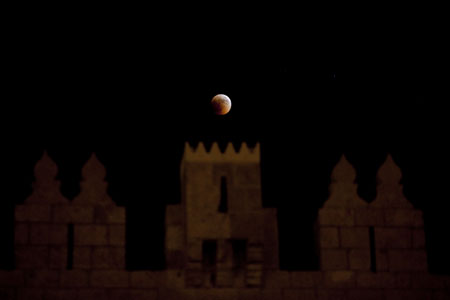 The lunar eclipse is seen through the old city walls in Jerusalem, Israel.

Not everyone had a equal view of the eclipse. In eastern Africa, the Middle East, central Asia and western Australia viewers were able to enjoy the entire event.

However, the eclipse occurred during daylight hours in the US, rendering it invisible.

As the eclipse began at 6.24pm its early stages were missed by Europeans. In the UK, sunset doesn’t occur until 9.19pm. 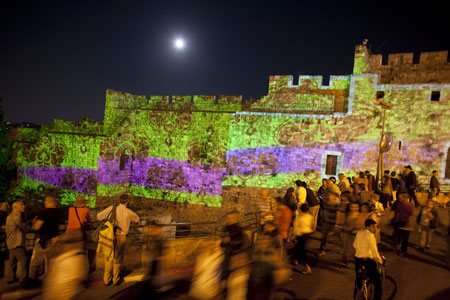 In particularly Australia, the stunning eclipse may have done something to make up for the travel chaos caused by the Chilean volcano which grounded hundreds of flights.

Professor Fred Watson, astronomer-in-charge at the Australian Astronomical Observatory, said the best view would have been from the moon itself.

“If you could watch the phenomena, you would see the earth moving across the sun and it creating a brilliant red rim around the earth,” he told AFP.

In Asia many people waited more than four hours to secure prime viewing spots before the eclipse occurred.

What is a lunar eclipse?

At night, the moon is normally lit up by the sun. However, during a lunar eclipse the Earth, sun and moon are in line so the Earth’s shadow covers the surface of the full moon.

Sunlight that has passed through the Earth’s atmosphere makes the moon appear red, brown or black according to the level of dust in the atmosphere. Hence last night’s blood red moon.