The first black president of South Africa was laid to rest following 10 days of tributes, with 4500 invited people paying respect to the life of the freedom fighter after he died aged 95.

Mandela’s body was held in state before being taken in a coffin on a gun carriage.

South African president Jacob Zuma was seated between widow Graca Machel and ex-wife Winnie Madikizela-Mandela while the coffin, covered in a South African flag, stood below the speakers.

The ceremony was a combination of political and tribal, with elements of his Xhosa people a significant part of proceedings.

His granddaughter Nandi said she would miss his laughter and smile. 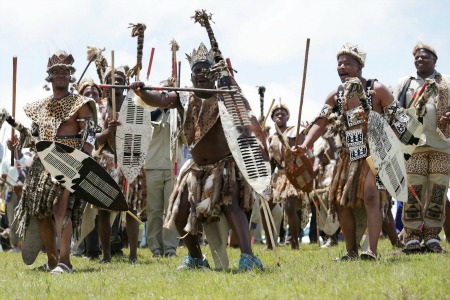 Villagers near his home town watched from a nearby hill via a big screen, while high profile invitees – including a number of African leaders, Prince Charles, Oprah Winfrey and Richard Branson –  sat during the long ceremony.

Archbishop Desmond Tutu was said to have been controversially left off the guest list was also in attendance.

There was a show from military jets and tributes including words from a nominated family spokesman, Chief Ngangomhlaba Matanzima, who paid tribute to the medical staff who looked after Mandela before his death.

“A great tree has fallen, he is now going home to rest with his forefathers. We thank them for lending us such an icon,” he said.

President Zuma said: “Whilst the long walk to freedom has ended in the physical sense, our own journey continues.”