Make the most of winter and hit the Aussie slopes

There’s no better feeling than walking into work on a Monday morning and attracting jealous stares for looking like a raccoon, having returned from a snowy sojourn over the weekend. Your rosey glow and tanlines from goggles ensure co-workers will know exactly how your weekend played out. From Sydney or Melbourne, it’s a six-hour drive to the snow, so if you get a good start after work on Friday, you’ll be in the Aussie Alps to catch the bell-ring for last orders before an early rise for the first chair in the morning.

And that’s exactly where we find ourselves, rugged up against the crisp alpine air which never quite chases the hangover away completely. We had checked into the hotel the night before, about five busloads of us. People without equipment were quickly sorted out so that we could get away on time. The road to Thredbo took us through Kosciusko National Park, its forest floor changing from green to white the higher we got. If you’re lucky, rain transforms into snow. We, however, are blessed with a bluebird day, the sun making it feel warmer than the official 5°C.

Thredbo isn’t exactly the Swiss Alps or Canada’s Whistler, but there is fun for every level. A yellow run called Friday Flats will get you started if you’ve never skied or boarded before, or if you just need to get your snow-legs back. Fortunately, we form a small pack of relatively experienced riders and venture up Gunbarrel Express and across to the Merritts area where some comfortable blue runs get us grinning from ear-to-ear as we race each other. All of a sudden, those cold rainy nights dodging puddles in Sydney all seem worthwhile.

We move over to the Crackenback area once we’re warmed up, where black runs offer exciting lines through the beautiful snow gums. These trees, squat and sprawling, add a uniquely Australian feel to mountain riding, compared to the treeless “steeps” of the European Alps or the high-rise pines of North America. Also uniquely Aussie is the chance to spot fat wombats, alpine birdlife
or brumbies – wild horses – that still roam the countryside.

You work up a decent appetite on the slopes, so by high noon we’re warming our mitts around a chilli-dog and cooling them again with a refreshing beer, while catching some sun in the village. A full belly, a high-altitude beer-buzz and sun could make a cokehead fall asleep but then, at the thought of all those long white powder lines, it doesn’t take much to strap in again. We ride the rest of the day, taking a few obscure lines with patches of powder knee-deep, spending time at the top of the mountain at Sponars and Antons t-bars and Australia’s highest lift-point, Karels t-bar. It doesn’t matter how much of a pro you are, at the end of your first day of the season you find muscles you never thought you had. And if you’re particularly unfit, the end comes sooner. Ah, apres drinks – takes the edge off the soreness.

We mosey over to a pub with a patio and buy a couple of jugs, some nachos and hot chips, and proceed to devour them. The sun strikes the mountains on its way down and throws out a glow. Soon enough, we’re in shadow and everything gets colder than a baby toe in a ski boot. 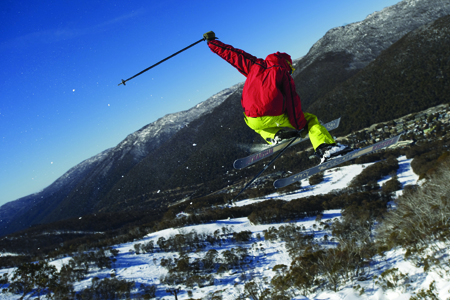 Getting Jäger with it

Partying in Jindabyne, Thredbo’s neighbourly ski town, is as much a part of the ski package as falling on your arse or falling in love with a European ski instructor. Actually, all three go hand-in-hand.

So, as my snow-buddy Justin orders our first round of drinks, followed by Jägermeister chasers – hey, I didn’t say we were original – we feel like locals. We could get used to this kind of life. We toast each other and relay stories to our new friends of our boarding adventures. Like getting lost because one of us couldn’t tell our left from right or, more crucially, our blue run from our black run. Or boasting about going from Snow White to Shaun White after just one lesson. Yeah, you’ve heard that one before.

Then, as the shots continue to flow, we’re practically buying ski gear online and signing up to be Thredbo life members. Luckily, the tall tales are interrupted by another après-ski tradition: drinking games. A few of the really enthused take the stage, stripping off and drinking in representation of their respective countries.

This, of course, soon leads to another, rather similar tradition: hooking up. Watching back-to-back episodes of Home and Away would be less predictable. But out of respect to the country of Germany and my snow-buddy, Justin, what happens in Thredbo stays in Thredbo.

Naturally, day two of a ski weekend is a little different from day one. At 7am, we’re falling into damp boots and mentally ripping up the life-time memberships we signed last night. After heading into the dining hall, past several frosty vomit patches, we devour a hot breakfast in anticipation of the day ahead. Unlike the previous evening, the faces around me are pale and sheepish. Well, apart from the few who arrive late, clearly still drunk.

Returning to Thredbo, the fresh air and the pull of the powder slaps the hangover away. Partially, anyway. The snow is slushier than the first day, but we’re secretly happy for Mother Nature to be playing hangover nurse, cushioning our falls today. Heading higher to test out our new-found confidence, we try out some ‘air-time’ on the jumps. In one fell swoop, all confidence is lost as I get too much speed and come crumbling down.

After a quick pit stop at the high-altitude cafe, where we clumsily unravel our gloves and jackets simply to grasp a hot chocolate, we’re on our way again. The afternoon snowboarding session is a mixture of fatigue, memories regurgitating from the night before and the sadness of knowing all good things must come to an end.

With each run potentiallyour last, limits are pushed, tricks are attempted and new manoeuvres are mastered – in our minds, anyway. It’s an unbelievable feeling, considering most hangovers of this scale are spent on the sofa, not the slopes.

From the moment we were picked up on Friday afternoon and opted for the “party bus”, the trip was seamless. Meals, accommodation and gear were all taken care of – all we had to was enjoy ourselves.Before we leave, a group gathers to watch a snowboarder from our tour who’s been dared to complete a nude run. We are just in time to witness him sailing down the final slope, not quite naked but naked enough. It’s a fitting ending to a trip that’s all about the package. 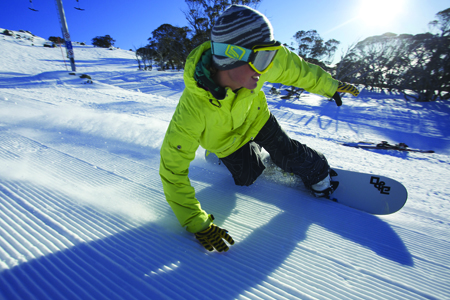 Australia may be better known for its sunlit beaches and parched interior but it also has some decent snowfields. Strap in and check them out this winter.

The resort claims to have the longest runs and largest snow-making system in Australia. It’s about halfway between Sydney and Melbourne – about 500km, or 5-7 hours’ drive, from each.
How much: Lift pass daily $107, five-day pass $460.

Just down the road from Thredbo, this massive chunk of glorious white terrain is Australia’s answer to European mega-resorts, with a downhill incline regarded as one of the most vicious in NSW.
How much: Lift pass daily $109, five-day pass $479.

About 350km from Melbourne, Hotham boasts the highest average snowfall of any Aussie resort and reputedly the best powder, so head here for excellent free-ride facilities and some challenging runs.
How much: Lift pass daily $106, five-day pass $482.

With the second-largest lift system in the southern hemisphere, Buller delivers more runs for your dollar. It’s less than 240km from Melbourne and is where Australia’s Olympic skiers train.
How much: Lift pass daily $104, five-day pass $437.

About 375km from Melbourne, Falls is home to some
of Victoria’s best back-country terrain. It prides itself on its 120m super-pipe and rail park, along with more than 92 ski runs.
How much: Lift pass daily $106, five-day pass $482.