It’s a surfer’s nightmare.However, ‘dolphins’ emerge the culprits; five, travelling 20 metres apart, each taking its turn to leap energetically above the waterline and thrill the hundreds of beachgoers lazing and playing along the one-mile stretch of lion-coloured sand.

The sight of these sleek marine mammals is the ideal start to a wave-riding lesson in England’s surfing capital.

Newquay’s title stretches back to 1928, when Australian swimmer Charles ‘Snow’ McAllister passed through for a wave on his way home from the Amsterdam Olympics; the Australian connection then reinforced at the conclusion of World War II, when members of the country’s airforce held a ‘surf carnival’ that drew 5000 curious locals to watch the athletic antipodeans tame the town’s mighty breakers.

Although Newquay’s seven miles of coastline, comprising 11 beaches, welcomes consistent swell to its host of beach breaks, most of which work best in south to easterly offshore winds, today’s waves at Tolcarne and neighbouring Fistral are unusually small, almost frustratingly so. 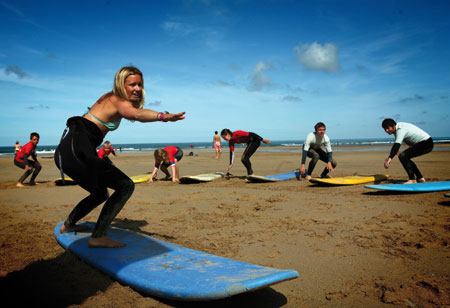 However, they’re perfect for the absolute novice accompanying me, my girlfriend Leanne. Having tired of being left at home during my adventures on the beaches of Europe and Northern Africa, she has finally decided to learn to surf.

After the obligatory ‘how to stand up’ lesson from our instructor, Peter, a New Zealander far from his homeland, but very much at home in the ocean, Leanne is set her mission: to catch a wave and, at the least, get to her knees.

As she sets about the task with vigour, Peter and I chill a little further out to sea and he points out the landmarks surrounding Tolcarne, many of which I will later visit.

There’s the cliffside lift of the Hotel Victoria, in which a party of stags plunged 100ft to the ground when it failed in 2010; the harbour wall at nearby Towan Beach, where only locals in possession of a password are welcome to ride the break; the white 14th-century heur’s hut, from where a watchman would alert townsfolk to shoals of pilchard; and the home of Lord Long on Towan Island, accessible only by a 100m suspension bridge, and recently put on the market for £1m. 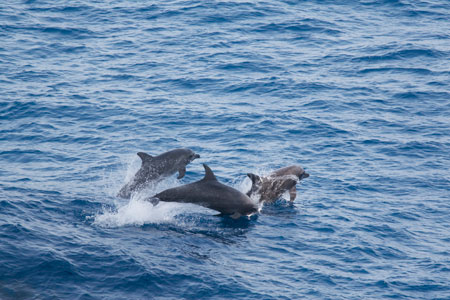 Further out to sea, a couple in kayaks tracks the dolphins, and a lone stand-up paddleboarder makes his way across the bay, while a jetskier makes the most of the atypical lack of swell, tearing across the smooth ocean, scattering seagulls as they scavenge for food.

For the surfers, patience is the order of the day, and eventually it pays off; I manage to latch on to some of the sea’s more generous offerings, coaxing my way to the shore along rare two-foot glassy faces, working hard to tease a ride from the shy swell.

Leanne looks on, her face a mixture of admiration and jealousy, although the next wave affords her the opportunity to improve. She scrambles aboard it, sliding down the face and getting to her knees, and then her feet, her balance that of a newborn foal. 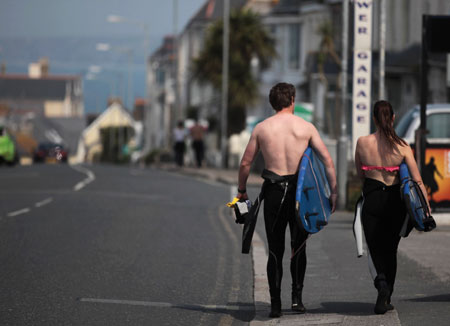 Then, tired after a journey of countless miles, the wave’s energy dissipates, and Leanne tumbles into the whitewater, emerging from the froth with that glow every waverider will recognise: stoke.

An hour-and-a-half later, her intoxication yet to evaporate, she gently protests as Peter and I decide to call it a day.

At the surf shop, Steve, an old, bronzed sea dog, his deep tan testament to the fact he’s no weekend warrior, listens intently to her tales, surely having heard thousands similar, but indulging her in that laidback manner all Cornish folk seem to possess.

And as he does, the dolphins, those graceful acrobats of the sea, frolic their way back across the bay, no doubt cursing today’s small swell, but, like us, making themselves a promise to soon return to the UK’s surfing capital for another dose of sunshine and stoke.

Be sure to get a meal at Kahuna Restaurant And Beach Bar at Tolcarne Beach. The establishment has upmarket charm and style, and is a genuine suntrap with views unimpeded by anything more than passing birds and boats. Mains from £10.
kahunatolcarne.co.uk

On The Rocks Bar, set over Towan Beach, prides itself on its affordable drinks, from £1.50. There’s a sun deck from which to enjoy panoramic views. ontherocksbar.co.uk

Reef Surf Bar has been voted the best bar in Newquay two years in a row. The bar becomes the place to party when the sun goes down. Pints from £2.50  reefsurflodge.info

Police clash with angry students in Sydney and Melbourne