In the city of light… and dark, police battle against illegal visitors to the Paris catacombs

Trudging through a dark, humid labyrinth of passageways below one of Europe’s most famous capitals, my guide scours the walls, her headtorch searching for signs of activity.

Suddenly, she stops and picks something from a crack in the 200-year-old hand-carved tunnel wall. It’s a note. I hold my breath as she passes it me to read.

A centuries-old prophecy or an ancient warning? “Hi to everyone who reads this!” I turn the paper over to find it is written on the back of a nightclub flyer. Far less profound than I had hoped.

It’s only a few hours after dawn and I am with the three-person police team searching the vast network of underground tunnels in the heart of the City of Light, looking for illegal visitors.

The huge, almost 300km, network was quarried hundreds of years ago to provide stone for the city’s ornate buildings and monuments.

Part of the network is also filled with the bones of some six million Parisians, whose remains were moved here, starting at the end of the 18th century, when cemeteries became full. Another such area, the Catacombes de Paris, is open to tourists. 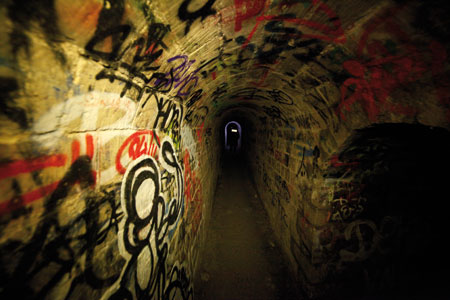 However, the underground shafts that I’m walking through – hewn from limestone 20m below the city streets – have been off limits to members of the public for more than half a century.

Not that you would know it from the colourful graffiti tags sprayed over the walls and ceilings, plus the occasional party leftovers: the empty beer cans, bottles, and even traffic cones.

After the 1955 entry ban, Parisians gave a typically Gallic shrug and carried on visiting them anyway. In the first weekend of June this year alone, police found about 30 people scattered among the catacombs.

The cops do their best to round up illegal entrants, but the one or two patrols a week, combined with the modest €60 (£50) fine for those caught, show exactly where the tunnels are on the list of police priorities.

Much of their job is helping inexperienced visitors lost in the maze of interconnecting tunnels. These visitors, known
as ‘cataphiles’, are locked in a constant game of cat-and-mouse with the cataphile cops, nicknamed ‘cataflics’.

“It’s all ages and backgrounds who make up the cataphiles,” my guide, brigade chief Sylvie Gautron, head of the police unit charged with patrolling the tunnels, tells me.

“The majority are students, and mostly men, but I have met older people down here, business people, too. Some people are fanatics. Some are just explorers. Some just come down here to smoke cannabis or drink.“ 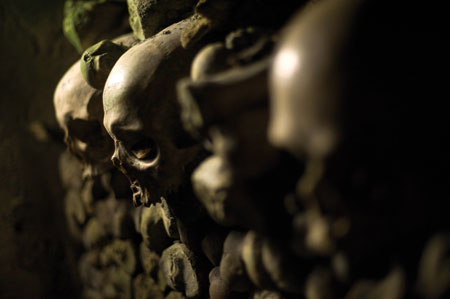 While some cataphiles use the tunnels simply as a party venue, others brave the dark for peace and silence, choosing to decorate the caves with intricate paintings and sculptures.

But the tunnels can be dangerous, and that is exactly why they are restricted. People often become disorientated and lose their way. They can fall and injure themselves. That is when they need the help of the cataflics.

Gautron and I descended through a metal street cover near La Prison de La Sante, in Paris’ 13th district and are now trekking, sometimes bent double, through the occasionally flooded shafts, eyes peeled for any signs of cataphiles.

Wandering through the underground shafts is a creepy experience. The airlessness, humidity and temperature rarely below 40 degrees means you can’t quite get your breath.

Claustrophobia has never featured on my radar before, but wandering through the stifling tunnels, I suddenly started to think of the hundreds of tonnes of rock above me.

Cave-ins do happen at times, and the chambers of catacombs have always posed safety concerns for construction in the city. All the more reason to keep people out.

And, it seems, police may be slowly winning the battle; Gautron estimates that only about 60 fines were issued last year, compared to almost 350 the previous year. 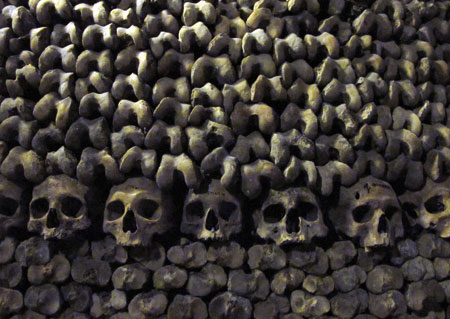 A few days later, I track down cataphile Franck Palier, a computer technician from Paris. He’s been visiting the tunnels for more than 20 years and goes underground about four times a month to “explore, take photos, meet friends and because it is forbidden”.

Franck respects the police who patrol, even though he is constantly in danger of being met with a fine and an escort from his subterranean sanctuary. “They are just there doing their job,” he explains.

“Without them the tunnels could become anarchy and if they were there all the time, that would stop cataphiles from enjoying their hobby.”

He is disappointed that a rogue few are giving the rest of the Paris’s cataphiles a bad name. It’s unfortunate for those who are genuinely passionate about a life below the footpaths.

“Some people who visit the tunnels don’t respect them. Some go and break things and leave rubbish everywhere. Others go there and clean up and make things,” he says.

“Personally, I love the tunnels, so I will continue to go, no matter what. Despite it being forbidden, I don’t think I am some kind of dangerous delinquent and I don’t damage things when I am there.”

Back to my night in the shafts, and after more than three hours, Gautron draws the hunt to a close without finding any snoozing cataphiles.

But she will be back, to help the lost, and to continue the search for those who are intent on exploring or partying in the darkness beneath the City of Lights. 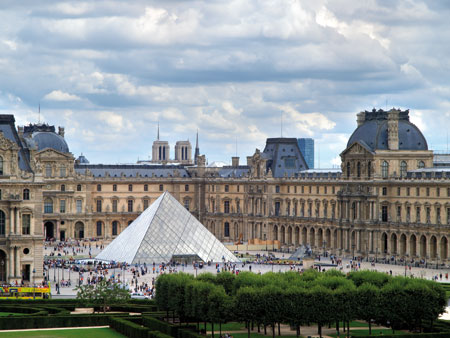 Although access to much of the tunnels is forbidden, a small 1.7km stretch, known as the Catacombs Of Paris Museum, is open to the public.

Combined, the tunnels house the bones of some six million Parisians, stacked floor to ceiling. The carrieres (tunnels) are principally made up of two unconnected networks; the first extends below Paris’s 5th, 6th, 14th and 15th districts, while the second smaller area of about 25km lies below the 13th district.

During WWII, part of the tunnels were converted into a bunker with walls, electricity, running water and telephone lines.

In the final days of the war, the French Resistance used them as a headquarters. 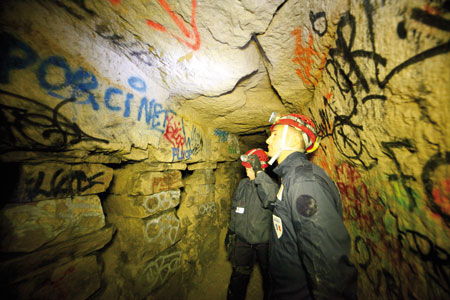 280: The approximate length in kilometres of the hidden tunnel network below Paris

1955: The year Parisian authorities made it illegal to tour the catacombs

60: The amount in euros that people found exploring the tunnels can be fined

200: The largest number of people discovered partying in the tunnels in the past three years

250: The number of entry points to the tunnels throughout the city