Man jokingly asks hotel for pillow fort during booking, gets one

Gord Edwards booked a room at Winnipeg’s Fairmont Hotel and noticed the booking form had a spot for special instructions and immediately sensed a moment from creative mischief making.

“I wrote down, ‘Pre-made pillow fort, and a vanilla coke,” Edwards told the Winnipeg Sun newspaper.

He arrived though to find that the hotel staff had noted his request and supplied him with a ‘Pillow Fort Kit’ comprising an assortment of pillows, sheets, ‘survival treats’ to sustain those seeking refuge within. 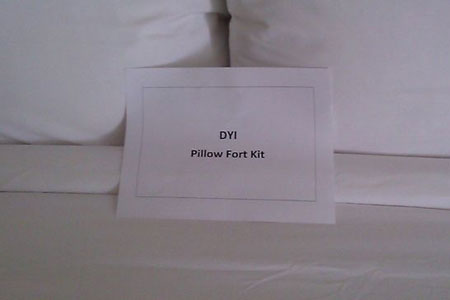 “I consider myself a man of action, so when I saw the tools before me, I knew I had to make it happen,” Edwards added of his decision to proceed and make, as he puts it, the best pillow fort he could, or rather blanket fort, as it turned out.

“As I kid I used to make them all the time with my twin brother Cliff/ We didn’t really have any toys growing up, so we had to make the best our of everything we had. I would say it is technically more of a blanket fort than a pillow fort – to me all the forts are pillow forts.” 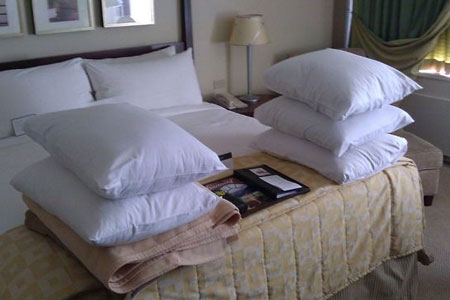 He finished off his fort with a cheeky ‘No Girls Allowed’ sign to tease his girlfriend, and posted pics of his fort-building exploits which garnered 275,000 hits 18 hours.

“The response I have received has been mostly positive, though to the people being negative about it, I just want to say… have fun with the little things.”

A legend to man-boys everywhere. 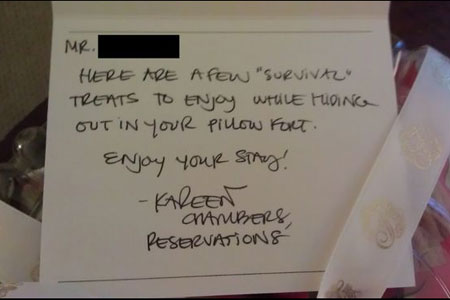