Manning, a four-time NFL Most Valuable Player who led Indianapolis to a Super Bowl crown in 2007, smiled as he spoke at the Broncos team headquarters just two weeks after an emotional departure from Indianapolis after 14 seasons.

“I’m very excited to begin the next chapter of my playing career,” Manning said. “I can tell this organisation is committed to winning. This is a great place to be.

“In the end, I felt the Broncos were just a great fit. I’m thrilled to be here, looking forward to meeting my new teammates and hopefully leading the Broncos to more Super Bowls.”

Broncos vice-president John Elway, a retired two-time Super Bowl champion quarterback for Denver, said he was confident after seeing Manning in a workout that his skills were near their peak.

“I believe he has got a lot of great football left in him,” Elway said. “My goal is to make Peyton Manning the best quarterback who ever played the game.”

Manning, whose $US19.2 million annual average salary is the most for an NFL quarterback, will wear the same jersey number, 18, that he used with the Colts after Frank Tripucka, the 84-year-old first quarterback of the Broncos in the 1960s, approved the team un-retiring his old number.

“He really wants me to wear his number. It truly is an honour for me,” Manning said.

The Broncos add the third-best quarterback in NFL history behind Brett Favre and Dan Marino with 4,682 completions for 54,828 yards and 399 touchdowns.

“Peyton gives us a chance to win another world championship,” Broncos owner Pat Bowlen said. “Peyton is one of the best ever to play this game.” 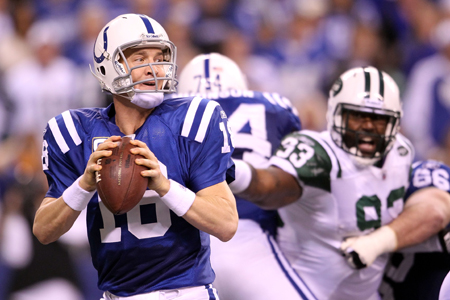 Manning, who will turn 36 on Saturday, was released by the Colts on March 7 after the team decided not to pay him a $28 million bonus to pick up the final four years on his contract, choosing instead to select star college quarterback Andrew Luck with the first pick in next month’s NFL draft.

Manning missed the entire 2011 regular season after a fourth neck surgery but has been medically cleared to return to the field by doctors.

He passed physicals for several teams but said he still feels he can improve arm strength and endurance related to nerve regeneration in his neck.

Manning’s contract requires him to pass a physical in 2013 to make $20 million guaranteed money next year and in 2014 and pass physicals to earn his salary in 2015 and 2016, a safety clause in case Manning’s neck injury limits his ability.

“I told him, ‘I don’t want him to risk his life and I can’t risk the Denver Broncos,'” Elway said.

Despite going 8-8, the Broncos reached the playoffs last season behind quarterback phenomenon Tim Tebow, who has attracted interest from several clubs.

“If he is here next season I will be the best teammate I can be,” Manning said. “If other opportunities present themselves to him I will wish him the best. He’s going to be a great player wherever he is.

“I’m a fan of his too. He’s a great guy. I have a great respect for what he accomplished last year.”

The Bacuit Archipelago, The Philippines

Down in the dumps? How to get over a relationship break-up