Facebook founder Mark Zuckerberg has a Facebook stalker and has taken out a restraining order to stop his scary uber-fan from continuing a barrage of disturbing messages.

Zuckerberg apparently feared for his safety after Pradeep Manukonda bombarded him with online messages, flowers and handwritten letters.

Manukonda even contacted Zuckerberg’s sister, begging for her help in contacting his idol.

Zuckerberg has now obtained a restraining order banning Manukonda from coming within 300 yards of him, his sister Randi Zuckerberg and his girlfriend Priscilla Chan.

According to TMZ, which got its hands on the restraining order, Manukonda’s has also turned up at the Facebook offices, as well as at Zuckerberg’s home in Palo Alto.

“I owe entire life at your service… please help me, then i am ready to die for you.” 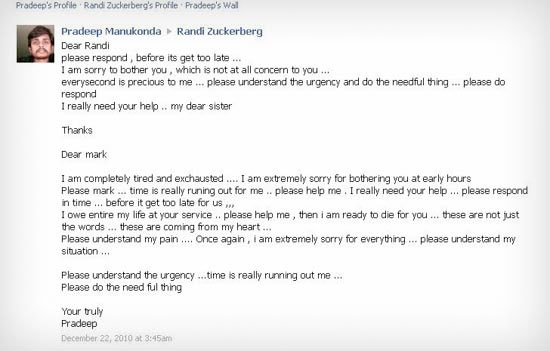 In another handwritten note, he writes:

“Thank you for your valuable time and attention towards my problem.

“I am indeed very grateful to you. If I get a chance to work with you in the near future it would be my honour. I know I am working with a man of values. Thank you for being a source of inspiration to all of us.”

There will be a hearing later this month.

Aussie woman swallowed by sinkhole as she hangs out washing