Martha, from Argyll, began posting the photos on her blog, NeverSeconds in April, and received more than two million hits in a few weeks.

But in a post entitled ‘Goodbye’ Martha revealed that she had been taken out of her maths class to be told by her headmaster that she was no longer allowed to take pictures of her food.

In a strongly worded statement defending their actions, Argyll and Bute council appeared to accuse Martha of “unwarranted attacks” on their food provision:

“Argyll and Bute Council wholly refutes the unwarranted attacks on its schools catering service which culminated in national press headlines which have led catering staff to fear for their jobs,” said the council statement.

“The Council has directly avoided any criticism of anyone involved in the ‘never seconds’ blog for obvious reasons despite a strongly held view that the information presented in it misrepresented the options and choices available to pupils.”

The ban, which many Twitter users have suggested wouldn’t stand up to legal scrutiny, was put in place by Argyll and Bute Council.

“This morning in maths I got taken out of class by my head teacher and taken to her office. I was told that I could not take any more photos of my school dinners because of a headline in a newspaper today,” read Martha’s final post.

“I only write my blog not newspapers and I am sad I am no longer allowed to take photos. I will miss sharing and rating my school dinners and I’ll miss seeing the dinners you send me too.” 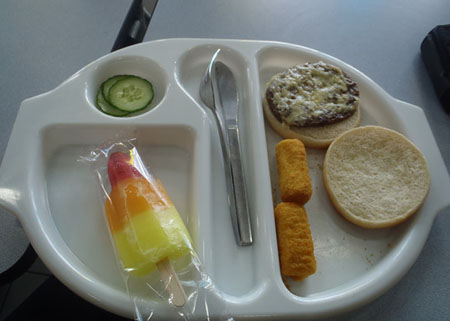 The council’s decision is due to a Daily Record story about Martha featuring the chef Nick Nairn, which had the headline  “Time to fire the dinner ladies”.

MSP for Argyll and Bute, Michael Russell, tweeted: “I think the decision is daft and I will be asking the council chief executive to reverse it.”

A statement from the council last month said: “Our school meal provision is fully compliant with nationally agreed nutritional standards.

“Young people make a choice from at least two meals and salad, vegetable, yoghurt and cheese options are available each day.”