Those chosen to push forward will have to do the hard yards in defence as well, and look to snatch a goal on the counter or from set pieces, with the Aussies’ greatest weapon absolutely no secret to anyone – it’s Tim Cahill.

Here’s the crib notes on Australia’s midfielders and forwards…

Oliver Bozanic, 25, Luzern: A journeyman in England when at Reading, spending time on loan at Woking, Cheltenham Town and Aldershot Town before returning to the Central Coast Mariners in 2010. Now based in Switzerland, his first Socceroos cap came last year against Canada. Bozanic has picked him for his versatility across the midfield.

Mark Bresciano, 34, Al Gharafa: For all the talk of youth, Postecoglou would be mad if this bloke doesn’t start as Australia’s No 10 and chief playmaker. Sure, he’s old, had a dicky back and had an enforced couple of months off after his transfer to Qatar was deemed dodgy (who’d have thunk it?!), but he’s a vital cog in the machine – Australia simply don’t have the depth for him to not be.

James Holland, 25, Austria Vienna: Made his ‘Roos debut six years ago but hasn’t nailed down his place. Has had a tough few seasons since leaving the Newcastle Jets for Dutch club AZ Alkmaar and was part of Australia’s grim 2-2 draw at home with Oman in 2012. Now has his confidence back and picked up Champions League experience this season – his Austrian side played finalists Atletico Madrid. A punchy option off the bench.

Mile Jedinak, 29, Crystal Palace: Maybe the Aussies’ most important player in the holding midfield role, an excellent choice as skipper and the only player in the squad who’s a regular for his club in one of Europe’s top four leagues. He played every game for Palace in their incredible season but picked up a knock in their last match. Probably the most realistic, while remaining positive, in his public comments – he says they need to play like it’s their last match. 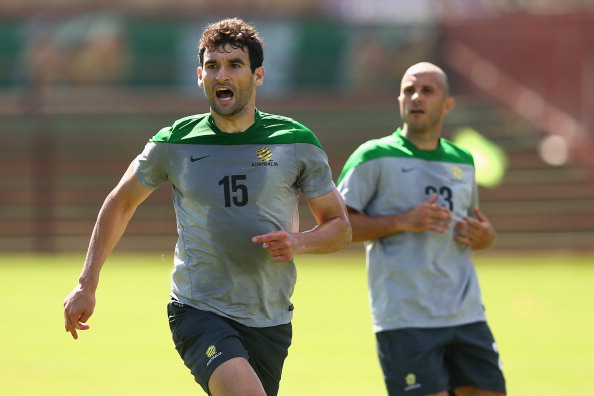 Mark Milligan, 28, Melbourne Victory: A better player than his unglamorous club career suggests – stints in Japan and China between his three A-League clubs – he’s been a stalwart for Australia. Has speed and the versatility Postecoglou craves, able to play wide at the back or in more advanced positions.

Dario Vidosic, 27, Sion: Another Swiss-based talent, Vidosic moved to Oz as a kid when his Croatian dad was signed by the Queensland Lions in 1988. The attacking midfielder had a shot in the Bundesliga with Nurnberg, but spent much of his four years from 2007 on loan in lower leagues. Impressed for Adelaide to earn a return to Europe for $700,000, an A-League record transfer.

Matt McKay, 31, Brisbane Roar: A veteran left midfielder who’s had goes in Scotland (with Rangers), Korea, China but always gone back to the Roar. Knows Postecoglou well as he was captain of the Roar in his maiden A-League premiership. Can play left back but would prefer not to, though Tommy Oar may have surpassed him as the Aussies’ first-choice wide man.

Tommy Oar, 22, Utrecht: The baby-faced winger is seriously talented with pace to burn and lethal crosses that could prove tasty for Tim Cahill when rare chances arise. Has been in Holland for four years having played 26 times for the Roar, mostly as a 16 and 17-year-old. Has been Australia’s next big thing for years and is now coming into his own – most definitely one to watch if he finds space.

James Troisi, 25, Atalanta: Is actually signed to Juventus on a four-year deal but half of his registration rights were sold to Atalanta. While with the Serie A club, the advanced midfielder’s been on loan at the Melbourne Victory for 2013. His first move to Europe was with Newcastle United’s youth programme. But he never played for the senior side and was sold to Turkey’s Genclerbirligi before a 2009 move to Kayserispor, who he’d scored a hat-trick against. Might be ready to make his mark.

Massimo Luongo, 21, Swindon Town: Had booked a holiday to Turkey with his girlfriend he was so sure of no Socceroos call-up, so image the rest of our surprise. Playing in League One is hardly a match for taking on Spain and Holland, or even Chile, but the midfielder who came through Spurs’ youth programme is taking it all in his stride. Will be delighted to get a run at all.

Tim Cahill, 34, New York Red Bulls: More a preacher than a leader when it comes to Australia’s chances in Cuiaba, Porto Alegre and Curitiba, and embracing the underdog tag. He’s not the player he was at Everton, but has shown he’s still lethal in front of goal and is in great nick – will get some genuine attention from opposition defences as he’s the Socceroos’ only genuine danger man.

Matthew Leckie, 23, Ingolstadt: It’d be a surprise if there isn’t a spot for the strong, fast and hard-running Germany-based striker in the starting XI against Chile – he’s an X-factor who will cause hassles and never back down. Was deployed on the left against Croatia and doesn’t appear to care less if he’s down the middle or out wide. If the Aussies get in behind the Chile defence, it’s a big chance Leckie’s the one who’ll do it.

Ben Halloran, 21, Fortuna Duesseldorf: Another attacking midfielder he, like Leckie, is plying his trade in Germany’s second tier. He’s also quick – Australia don’t lack speed – and gets his chance mainly due to injuries to the likes of Robbie Kruse. Loves to take defenders on and won’t be over-awed by the occasion if he gets a shot.

Adam Taggart, 21, Newcastle Jets: Gets his place in the 23 on the back of being the A-League’s top scorer last season with 16 goals in 25 games. Wouldn’t be there if Josh Kennedy was fit and will use any minutes as a chance to put himself in the shop window for a European club.

CLICK HERE to meet the Socceroos’ goalkeepers and defenders