The latest instalment of Jägermeister’s series of Ice Cold Gigs will see the London-based duo getting dropped off by helicopter on to a ‘Space Net’ suspended between the two peaks that form King’s Leap chasm in New Zealand.

The 22 metre wide net is made from a high-tensile material called Amsteel and can take the weight of a London bus. It should prove more than strong enough to hold the band plus their instruments which will be secured to a perspex ‘shelf’ placed on top of the net, to prevent everything from bouncing around too much!

The boys, who have played Coachella as well as Reading and Glastonbury festivals, aren’t spooked by the cold or the heights involved and can’t wait to get started.

“New Zealand is one of the only other places, besides London, that I’d ever want to live,” said lead vocalist and pianist Josh Friend at a press event yesterday. “I just love the pure clean air there”. 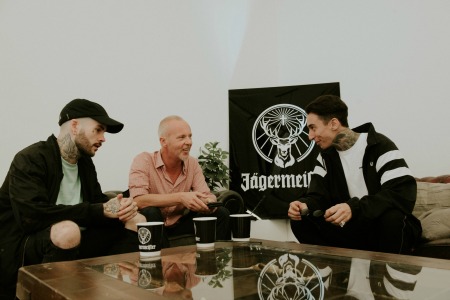 Drummer and percussionist Pat Lundy hasn’t visited the country before but admits to being a huge ‘Flight of the Conchords’ fan!

Jägermeister have been staging their Ice Cold Gigs for a number of years now as a cool reminder that the ideal way to enjoy their drink, a blend of 56 natural ingredients, is at -18c. Previous gigs have seen Bullet for My Valentine’s frontman Matt Tuck performing whilst free-falling 15,000 feet in a parachute near the Arctic Circle.

The King’s Leap stunt, which is managed by location experts Secret Compass, will also feature as the video to Modestep’s latest single, aptly named “Higher”, due out in November.