More than 36,000 Brits in the running for Tourism Australia’s ‘best jobs in the world’

However the competition is heating up with even more applications coming from candidates in the USA. More than 40,000 yanks want to snag a job Down Under promoting Australia’s natural beauty.

In total more than 300,000 people have applied for the jobs, which are:

Incidentally, a ‘funster’ seems to be another way of describing a PR, albeit possibly one enthused with oodles of additional fun-loving enthusiasm.

“We’ve taken one of the most successful tourism campaigns in recent times – ‘Best Job in the World’ – and made it bigger and better by coming up with a competition which represents our breath-taking landscapes, our unique wildlife, great food and wine and, of course, our huge sense of fun,” said Tourism Australia’s MD Andrew McEvoy. 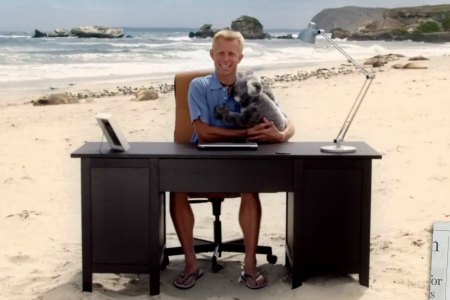 It’s not too late to get involved and convince Tourism Australia you’ve got the right stuff – you’ve got until April 10 to apply.

In 2009 Ben Southall from Hampshire, England hit the headlines when he bagged a job working on Hamilton Island in the Great Barrier Reed. Southall (who appears in the video below) reportedly worked hard in paradise for his £70,000 job and was stung by a irukandji jellyfish – he said at the time that it should have been called “the busiest job in the world”

“The job has allowed me to have adventures and keep exploring, write about it and learn new skills like filming, editing, presenting, public speaking and TV work” he told the BBC.

See the promotional video for The Best Jobs In The World below – and one of the applicants, Greg from Canada. We like his style.

Lunar eclipse turns moon red (but not in London)