Morocco’s cities are impossibly exotic. North African culture bumps up against all the quirks and traditions of the Middle East, leaving travellers caught up in haggling sessions for carpets, tripping over snake charmers’ baskets, drinking scalding mint tea or getting lost in dark, maze-like souks.

From the capital to the coast, there’s plenty to discover in the urban hubs across the country. Here’s our pick of the top spots to see. 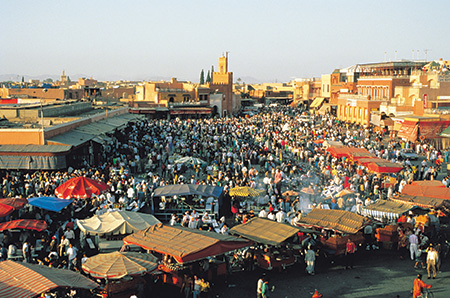 Morocco’s most famous city is the biggest tourist draw and no wonder. Particularly around the main square of Jemaa el-Fnaa, the city has a timeless Arabian appeal. Uneven, shabby-looking streets wind throughout and behind them lie amazing riads (traditional Moroccan houses), some private and others converted into guesthouses and cafes.

Almost all have a cool central courtyard with a swimming pool or water feature, and are perfect places to sit with a sweet mint tea.Spend your evenings back in the square, where the action goes on all evening.

Groups of Moroccans gather to chat, eat, play games or listen to music. Take a table at one of the restaurants at the centre of the square to soak up all the atmosphere, and if you’re brave enough, buy a bowlful of cooked snails to eat from one of the vendors.

Don’t miss: Brave a Moroccan hamman where you’ll be scrubbed, steamed and bathed to within an inch of your life. Try Hammam De La Rose for an authentic experience, at about £25 for 45 minutes. 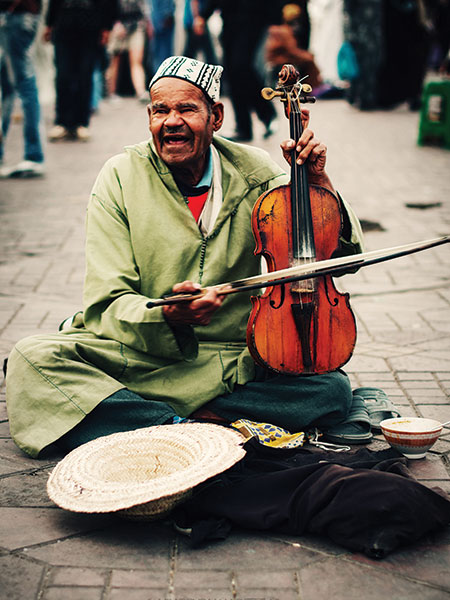 Anyone with a soft spot for Beat literature should make a stop in Tangier – once upon a time a notoriously seedy, dirty and debauched city, where writers such as Paul Bowles, William Burroughs and Jack Kerouac spent time in the Fifties. While Tangier is still far from polished, it’s certainly less edgy than it used to be.

The city centre is undergoing modern development and the beach is packed with Moroccan sunseekers at weekends. For a taste of the city’s older history, visit the Kasbah museum in Dar el-Makhzen, the former sultan’s palace.

Don’t miss: The Cafe de Paris (find it at the Place de France) was a popular counterculture hangout for the writers, artists and poets that flocked to Tangier for inspiration. 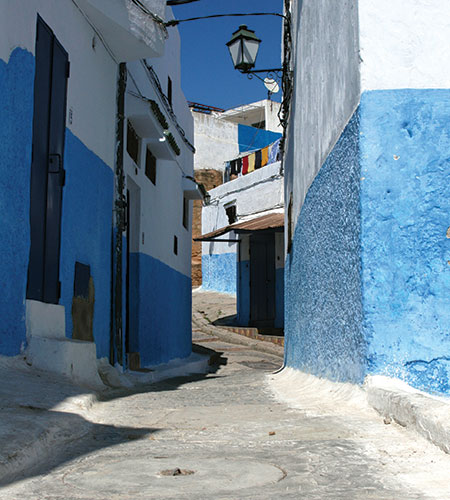 If you need a break from crowded streets, persistent carpet sellers and honking, screeching traffic, clean, quiet Rabat is the place to go and decompress. It used to be a refuge for the Barbary pirates who would hijack European merchant ships, but its crooked past is now far behind it.

Palm trees line the wide streets and there are a handful of Unesco sites to visit too, including the Roman ruins of Chellah, the historic Almohad gates and wall and the mausoleum of Mohammed V.

Don’t miss: Head to the Kasbah des Oudaïas which looks out over the Bou Regreg river, then take a walk through the surrounding small streets lined with blue and white houses. 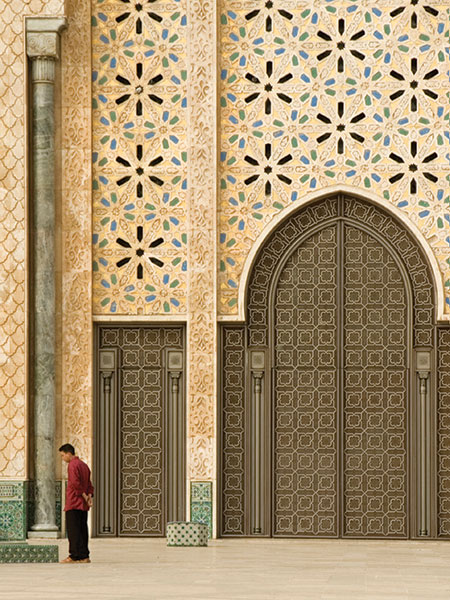 Casablanca is just as manic as you’d expect the economic powerhouse of Morocco to be. Visit the imposing Hassan II Mosque, which is the second-largest religious building in the world and one of only two mosques in Morocco open to non-Muslims.

While Morocco is by no means a place to go for a boozy break, Casablanca does have a thriving nightlife scene, and there are trendy bars and clubs along the beachside strip in Aïn Diab and in the city centre, on Rue Allal Ben Abdellah.

Don’t miss: Casablanca is famous for its glamorous 1930s Art Deco architecture around the Marché Centrale area. Go and check out the intricate carved friezes and beautiful tile work. 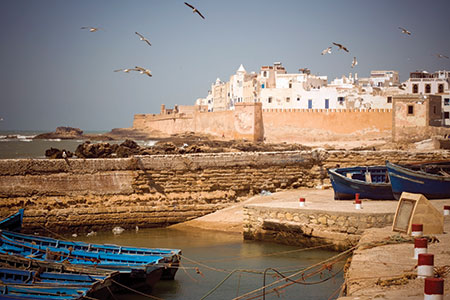 Essaouira might just be one of the most relaxing places in the world, an easy-going coastal city stuffed with tiny boutiques and galleries that are filled with paintings and crafts from Moroccan artists. Hang out at the 18th-century medina and neighbouring harbour, where fishermen bring their catch in.

If you want a taste of the goods, pull up a chair at one of the wooden shacks nearby, where the fish is cooked and served up a matter of hours after it’s been in the sea.

Don’t miss: There’s great surf along Essaouira Bay (gentle waves here are best for beginners) or at spots a short drive away, such as Moulay Bouzerktoun or Sidi Kaouki. 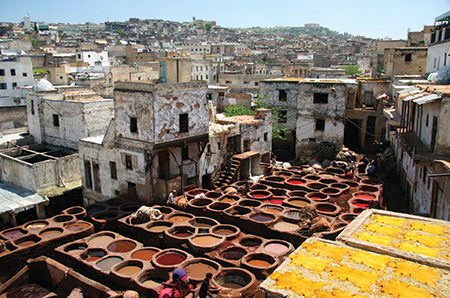 If you want to get a sense of what Morocco might have been like in the Middle Ages, try Fes. Home to the largest functioning Islamic medieval city in the world, the medina of Fes el-Bali looks as though nothing has changed since the city was first founded.

Donkeys carry produce around (although these days they’re often sharing the thoroughfares with motorbikes) and there are 9000 winding passageways, where tanneries and stores selling huge sacks of dye ply their trade in the same style they have for centuries.

Don’t miss: Stroll down either of the two main alleys in old Fes to reach Bab Bou Jeloud, the city’s monumental main gate, decorated with swirls of blue tiles. It’s always busy in this area so sit at one of the cafes for a spot of people-watching. 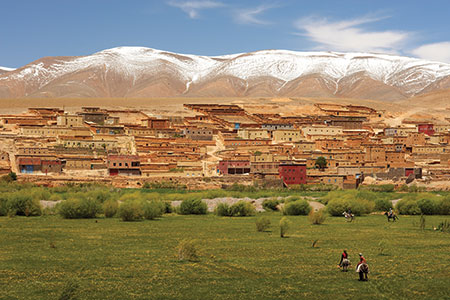 After a few days in the bustling chaos of Morocco’s major cities you’ll be dying for a bit of fresh air. Head into the mountains for a new perspective on the country and a taste of rural village life.

At 4167m, Mount Toubkal is the highest mountain in North Africa, and it’s possible to hike right up to the top even if you don’t have any previous trekking experience. This is a great two-day excursion from Marrakech, as the starting point of the trek is just a few hours’ drive from the city.

From the top, you’ll be able to see views of the Marrakech Plain, the High Atlas in the north and the Anti-Atlas and the Sahara in the south – that’s gotta make the climb worthwhile.

The northern Middle Atlas mountains are a scenic place to hike, with waterfalls and forests along the route. Tour operator Naturally Morocco’s ‘Cliffs, Cedar Forests and Cascades’ day-long walk takes your from the Berber village of Azrou through oak and cork woods up to the summit of Ras Kharzouza.

Here’s where you’ll have a picnic lunch before continuing on to the open plateaus, where you’ll see Berber shepherds tending to their flocks.

A lesser-visited hiking area is the volcanic mountain chain of the Anti-Atlas range. The ascent up Jebel Aklim (2531m) delivers views of the snowy High Atlas mountains to the north, and the desert range of Jebel Bani to the south.

On Exodus’ ‘Undiscovered Atlas’ tour, you’ll also get the chance to see traditional villagers’ way of life in small Berber communities along the way. The trek finishes in Taroudant, one of Morocco’s five imperial cities.

Video: Anaheim police fire on women and children during protest

Lawyers get ready for the big Tom Cruise v Katie Holmes divorce case – but is Holmes being followed by Scientologists?