Germany’s third highest mountain, the Watzmann, near the Bavarian town of Berchtesgaden, is not only a spectacular it’s also home to some of the world’s most scenic beer stops.

Here’s what happened when Scott Casey took a  hike…

“Montag!” I shout in my nasal twang towards a Bavarian family as I stumble into our alpine lodge.

“Do you know you just said ‘Monday’? quips my condescending German friend.

Crap. It’s ‘morgen’. I blame the altitude. But really, it probably had more to do with the five-hour hike up a sheer cliff face with only ancient chains for support followed by the endless supply of Bavarian Hell beer at the bar. 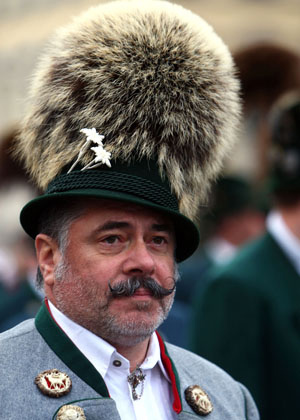 Welcome to Berchtesgaden, the town where moustaches are as thick as George W. Bush and the fashion gives a high street fetish shop a run for its money, with sexy milkmaid dresses and tight leather pants parading on the strasse. This is alpine living.

I’m here to climb the Watzmann, Deutschland’s third tallest mountain. Trekking up a mountain is nothing to be taken lightly. I’ve packed carefully, trained thoroughly and … what am I saying? I’ve done none of this. I’m as green as they come but luckily I’m hiking with an ex-German army unit, so am in safe hands. But in these hills devoid of most large animals, what do they hunt? Man?

Mountain lodging in the Bavarian Alps

It’s the first night and vainly trying to secure a bed in an army base, confusing a poor conscript in the process, we follow a local’s recommendation and head high into the hinterland to an alpine lodge. Here the owner offers us, Bethlehem-style, a discount night in the ‘barn’.

The ‘barn’ looks like it was assembled using the flotsam of the past 100 years, a mish-mash of fence palings and old buckets, but inside it’s a dream – a mint condition circa-1907 hiking lodge still rich with the smell of freshly cut wood and woollen blankets.

The sun rises and so do I, hitting the undulating path through the forest towards the mountain and stopping only to pay lip service to the Konigsee (King’s Lake), an unnaturally perfect expanse of icy water surrounded by looming mountains. 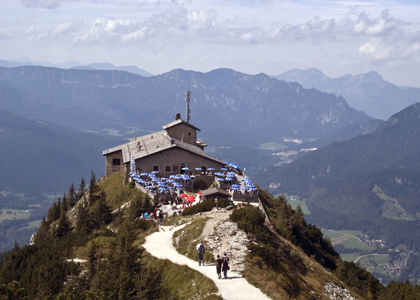 Drinking beer in the Watzmann House

Five hours of solid clambering up sheer cliffs grabbing onto chains drilled into the rock I sight our accommodation, the Watzmann House. Run by the Deutscher Alpenverein (DAV). Did I mention it has a bar? ‘Eine mass’ or a one- litre stein of Hell beer (crisp clear lager) is only € 5 and at this altitude, a little goes a long way.

Two hours into the zig-zag slog up the mountain the next morning I’m regretting taking advantage of those bargain beer prices. It’s only 600m to the summit but, trudging through the moonscape above the snowline, it feels like 100km. At the top I admire cliffs sliced by millennia of ice and water, an ocean of green valleys, the distant alpine peaks of Austria and pose for a Facebook profile shot.

BOOK A TOUR OF GERMANY

After a toilet break at the world’s scariest loo, a 1000m long drop, I’m commanded by the group of punctual ex-military Deutsch to begin the hike down. It’s a much quicker and easier trip; only four hours from the peak to the lake.

That evening as I sit on my veranda in another alpine lodge, drinking Berchtesgadener Hell, by my vote the world’s best beer, while the cows (who will provide milk for my morning coffee) graze just out of view, I reflect that alpine living is pretty damn special.

You can’t escape Hitler in Berchtesgaden. The village was the Fuhrer’s favourite place, and provided the setting for his mountain residence and diplomatic quarters, the Kehlsteinhaus – dubbed the “Eagle’s Nest” by a French diplomat.

Hitler even built the town’s train station which is symbolic of the Third Reich’s Brutalist architecture and his cronies, Goebbels, Goering and Himmler also had homes in the village. It’s easy to forget those dark times under the beautiful blue Bavarian sky but as I walk from a sunny day into a tunnel leading into the Oberbayern mountain range to access the original brass-lined elevator up to the Kehlsteinhaus, it’s not just the 20˚C temperature difference which gives me a chill. At 124m-high, the room is full of tourists drinking beer and eating in a building where Adolf once did the same.

But apart from reminders, such as the fireplace emblazoned with ‘1938’ (the year the Nazi party gave Hitler the house) and the damage of scavenging US soldiers, the building is devoid of any reference to its evil past.

Undoubtedly, it is a beautiful place with striking views. I even think about stopping for a beer, but having a pint in Hitler’s digs is a little creepy (and it was 7 degrees) so I leg it back down the mountain.

WHEN TO GO: During spring, summer and autumn, as the mountain huts close in winter.
GETTING THERE: Numerous airlines, including Lufthansa, fly direct to Munich from London. From Munich, take a train to Berchtesgaden (two hours).
GETTING AROUND: Public transport is excellent.
VISAS: South Africans need a Schengen visa.
CURRENCY: Euro. 1 GBP = 1.20.
LANGUAGE: German.
GOING OUT: A beer costs € 5-6.
ACCOMMODATION: A dorm is around € 19 and a hotel € 25-40 a night. Many take only cash.
GET MORE INFO AT: berchtesgadener-land.info

Related:
Destination guide – Germany
Is there more to Munich than beer and Oktoberfest?

Royal wedding: Wills given a kissing lesson before he weds Kate Middleton