The Swarm has been billed as Thorpe Park’s most extreme ride yet but even the most die-hard roller coaster fan is likely to be miffed if their adrenaline rush ends with a trip to hospital.

A test run of the of the rollercoaster, which is due to open in March, some of the test dummies were left severely damaged, missing arms and legs, after colliding with some of The Swarm’s  ‘extreme “near miss” spots’.

Thorpe Park said that “drastic measures” are being taken to fix the roller coaster before it opens to the public. 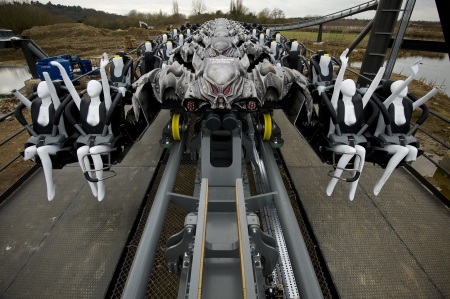 It’s headline-grabbing stuff and cynics are asking if the test dummy mutilations are, in fact, just a clever PR stunt.

It wouldn’t be the first time Thorpe Park had resorted to such tactics. The theme park once held a contest in which members of the public were asked to donate urine to create a ‘signature stench’ for horror maze SAW Alive.

Thorpe Park, however, claims the dummies were genuine casualties and lost their arms in pursuit of honing the ride to its most terrifying capabilities. Apparently the ride if now 100 per cent safe for use.

According to its website, The Swarm “takes you on a death defying flight through apocalyptic devastation. Picking you up and ripping through the sky on a mission of total annihilation, you’ll feel totally vulnerable as you hurtle through near misses and twisted inversions.

“Experience the unique head first, inverted drop from 127ft as you are flung into this merciless flight for your life.”