Bull jumps from ring, injures 40, and is shot

A bull jumped from the ring and injured 40 people as it rampaged through the stands at a bullfight in Spain.

A ten-year-old child is in intensive care with abdominal injuries at a Pamplona hospital and three people are in the emergency ward after the bull made a break for freedom by leaping out of the ring in Tafalla, northern Spain yesterday.

Video shows the bull jumping high enough to clear two 1.5 metre barriers around the ring in its desperation to escape. The animal then trampled screaming spectators, goring a man in the back.

Watch the bull jumping out of the ring.

After the bull jumped out of the ring, spectators grabbed its tail and threw capes and missiles in an attempt to stop the animal. However this caused the frightened bull to charge.

After about 15 minutes of chaos the bull was tied down by bullring employees and killed. 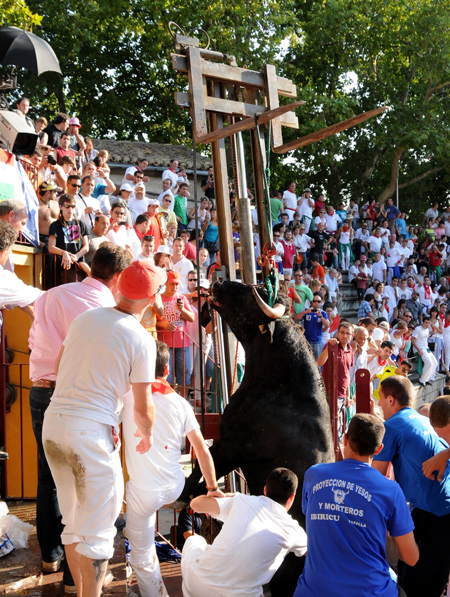 “The bull had already made a few attempts, but I was relatively calm,” said one of those injured. “And suddenly, I saw that the animal had jumped and, after staying stuck on the fence for a few seconds, it came over. Then there was chaos … There was stomping, pushing, shrieks, blows.”

Bullfighting, which is seen by many as sickening and unnecessary, has finally been banned by Spain’s north-eastern region of Catalonia.

Matador gored through throat by bull

A visit to Brighton, England

Have a giggle at The Big Wednesday Comedy Club