As I looked out over the Blue Mountains National Park I realised that it could have been a lot worse for those Three Sisters.

I’m not saying that being turned to stone (as the Aboriginal tale recalls) by your own father would be a nice experience, but Tyawan had only been trying to protect his daughters Meehni, Wimlah and Gunnedoo from an evil monster. I don’t think immortalising them in stone was part of his plan. Either way, he did give his children a glorious home.

The Three Sisters look down upon luscious, bouncy pillows of green that spread out as far as the eye can see. Above them, a few clouds cast shadows over the eucalyptus trees that reflect their famous blueish hue.

After living in Sydney for a few months, the Blue Mountains welcomed me with a much warmer greeting than I had anticipated.

The scenery was beautiful, but I needed more. I wanted to climb into it, be a part of it, hug those heroic cliffs.

Abseiling would make my dreams a reality, and funnily enough, my reality
a nightmare and my nightmare a dream again. It was clearly the way forward, or down at least.

Abseiling is a weird term. It comes from the German word abseilen, which means “to rope down”.

However, as this definition doesn’t do the activity justice, my own definition is “an activity underrated in its ability to terrify you to the very core of your existence. Your next breath solely relies on a piece of string that dangles beneath your own jittery legs”.

It may be a scary process but it is a surprisingly simple one. All you have to do is grasp the rope behind your back and then loosen and tighten your grip according to how fast your feet are moving.

Although I didn’t really understand the physics of it, I decided it was probably something you shouldn’t think too hard about.

When instructor Timmay (that’s how it was spelt on his anti-brain splattering device) started pitching up next to a 30m drop, where the cliff actually inverted underneath us, I decided that this was interesting.

I can recollect standing with just my tip toes on the edge of the cliff knowing it was time, to heed the great words of Fat Joe, and, “pull up our pants and do da rock-away. Now lean back, lean back…”

Things weren’t going too badly, until I made the foolhardy error of looking over my shoulder. Although the cliff-side view was majestic, never had the term “don’t look down” made so much sense.

Back to looking at my feet and soon an ecstatic bundle of nerves had made it to the ground alive.

A couple more abseils, a whole load of high fives and “woo-hooooo’s” later, this game had got easier.

Never so easy that when Timmay used the phrase “cruise down” it was to be tolerated. I know that Aussies are laidback fellows, but the only laidback thing about abseiling is the position.

One particularly hairy moment was when I fell into the Coffin Slot (it was called that). A small gap in the mountain had taken me by surprise and instead of bouncing over it I decided to fall inside, and have a little sit down.

Face to face, rather than butt to face, with the beautiful scenery, I found myself both frightened and exuberantly happy.
A few words of encouragement from Timmay above and Arie (his partner in crime) below, and my toes were eventually back on that cliff face.

After six abseils we’d come a long way (metaphorically and literally) so it was a long way back up to the bus. As luck would have it, just a five-minute walk away, a train was waiting for us.

You haven’t properly done the Blue Mountains until you get lost. Suffering from spacial dyslexia made this all too easy for me. “Haven’t I seen that somewhere before? Okay, I’ve definitely seen that before… Oh bollocks.”

Despite getting lost a lot, I thoroughly enjoyed my trek along the Prince Henry Cliff Walk that started at Echo Point and finished at Katoomba Falls.

Eventually finding the falls drenched in sunlight, I sat on a rock. I could have sat there forever. Whilst listening to the sound of the water cascading down the falls, I fell for that tiny part of the Blue Mountains.

Dramatic horizons are great, but sometimes it’s the tiny pieces that make them up which are unforgettable.

Before my visit to the Blue Mountains I’d always thought of myself as a bit of a beach babe, not really bothered about rocks and stuff.

Abseiling, a cliff-side walk and a few blissful minutes by a waterfall had managed to change all that. 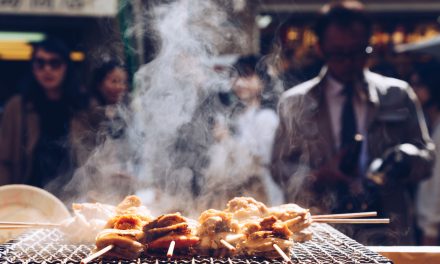 Living on the edge: the weirdest ways to get stuck into Edinburgh Fringe