My London: John Tremayne, head chef at The White Swan

﻿What baffles me about London is the number of options for late-night dining.

As a chef, it baffles and excites me in equal measure. Good, bad or ugly, there’s never a time or place where you’re more than 10 minutes away from something to eat – it’s the most accessible place in the world.

London’s best-kept secret is the view from Waterloo Bridge at night.
Well, it might not be the best-kept secret, but when the lights from the National Theatre illuminate the sky, it’s the best view of London.

When I want to chill out I walk my dog, Winston, in Greenwich Park then go for a coffee at [French bakery and cafe] Boulangerie Jade in Blackheath.

The most interesting person I’ve met is either Geddy Lee, who’s the guitarist for Canadian rock band Rush, in Covent Garden, or the first chef I ever cooked for, Michel Roux Jnr.

My favourite place for a drink is Seven Park Place at the St James’s Hotel next to Green Park. They mix a mean cocktail.

For when you’re hungover in London you can’t beat a warm salt beef bagel from Beigel Bake on Brick Lane. 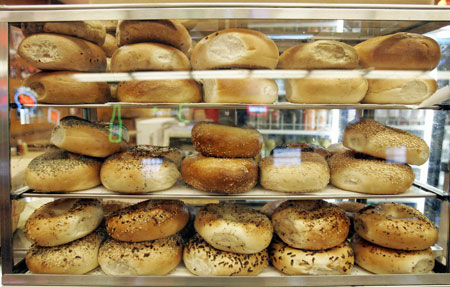 What gets me up in the morning is my alarm clock, and thinking of lunch service at The White Swan.

My perfect weekend is any uninterrupted weekend I can spend with my wife. It would preferably include dinner at Magdalen in London Bridge, whose potted crab is a simple but delicious indulgence.

The last naughty thing I did was stay out too late recently on a Friday, on a boys’ night out with some chef friends – far too much whiskey was consumed!

The biggest faux-pas I’ve made is pressing the open/close buttons on the Tube. It is a classic London tourist mistake, but one I always made when I first came here from Tasmania.

Five words that sum up London … The only place to live.