New trailer for The Bourne Legacy

Cross is another super-soldier-spy with training that makes him more deadly that the genetically engineered offspring of MacGyver and Double Impact era Jean Claude Van Damme. And he too, as a bone to pick with the suits that ‘made him’ what he is.

So what does the trailer throw our way?

There’s moody men and women talking in code about “there are more” and “burning it all to the ground,”, Edward Norton doing a ‘stressed man with greying hair’ thing as a merciless part of the machine, and the return of a number of faces from the series’ preceeding three installments. .

The trailer closes out with a snapshot look at some of the movie’s stunt work, with Aaron Cross riding a motorcycle down a massive flight of stairs with Rachel Weisz’s under threat doctor on the back, a kinetic car chase, fights on a crashing bus, and some globe-trotting locales that go everywhere from the streets of Manhattan to Waterloo station.

The Bourne Legacy is due for release on August 13 through Universal Pictures. 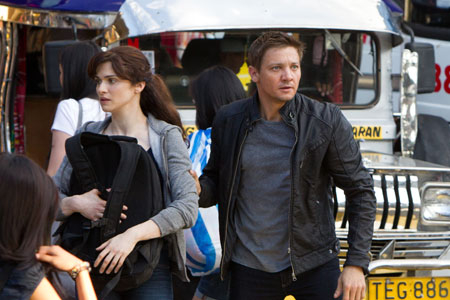 Video: Splashing out on the world’s best water slides

New sensor bra will only unhook for love