Newport State of Mind has been pulled from Youtube although Goldie Lookin Chain’s double-parody video mocking the song remains.

The spoof of Jay Z and Alicia Key’s Empire State of Mind, which replaced New York with Newport and sang the praises of fighting bouncers and throwing up, received 2 million hits on Youtube.

However, Newport (Ymerodraeth State Of Mind), created by MJ Delaney, has now been taken down from Youtube after a copyright complaint from EMI.

In place of Newport State of Mind, you now see this. 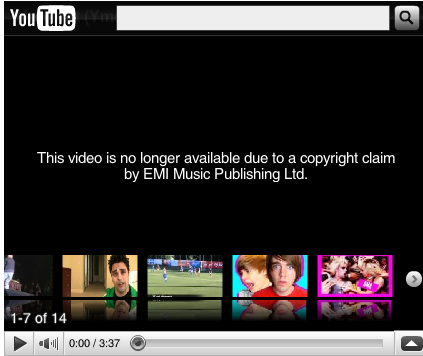 The drama continues as Welsh group Goldie Lookin Chain have ‘spit’ back at the Newport spoof, with a spoof of their own, Newport State Of Mind (You’re Not From Newport), watched by 170,000 people already.

Goldie Looking Chain member Rhys Hutchings raps: “You’re not from Newport / You’ve probably never been there either / I’ll bet you a fiver…” and goes on to point out that the original Newport State of Mind often mixes Newport with Cardiff.

Goldie Lookin Chain sold Newport to Sky News as: “The city of a thousand broken dreams… where choice is limited, where your missus is a nutter, where a different class of alcoholic drinks in Wetherspoon’s from 10am.

“It might not be much but at least it’s ours. A place where fantasy and reality gently touch each other’s hands like brand new lovers.

“Newport: a town built on football violence, out of concrete and steel. Newport: my home town. Where you learn the hard way but the right way.”

If you’ve never seen the original spoof, Newport (Ymerodraeth State Of Mind), you can watch it here.

Planes liquid ban must be lifted together, warns EU