Not an ass: Google filmed the street, but they did not kill the donkey

The message put out on Wednesday by the internet giant was prompted by reaction to the picture, which gave the impression that a Google Maps car had run over a donkey on a dirt road while gathering Street View images in Botswana.

In a blog post titled “Never ass-ume”, Kei Kawai of Google Maps said the donkey was merely enjoying a roll in the dirt when the car approached.

“Because of the way our 360-degree imagery is put together, it looked to some that our car had been involved in an unseemly hit and run, leaving the humble beast stranded in the road,” Kawai said.

“I’m pleased to confirm the donkey is alive and well.” 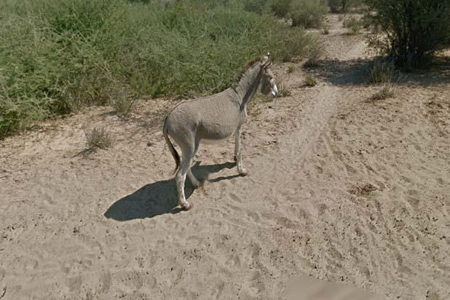 His blog post included a set of images showing the donkey standing and moving aside as the Google Maps car neared, and then staring inquisitively at the departing vehicle.