Top 5 places to see the Northern Lights: 2013 is prime time to see the aurora borealis spectacle

But whether the northern lights appear as flickering curtains of electric green, swirling mists of pink and purple or bands of brilliant blues streaked recklessly across the sky, you can’t deny there’s something wonderfully surreal about them.

As everyone knows, 2013 is supposed to be a bumper year for aurora borealis sightings, as the lights are in the liveliest phase of their 11-year cycle.

The science behind the auroras is that lights appear when highly charged electrons interact with either oxygen or nitrogen in the earth’s atmosphere, anywhere between 20 and 200 miles above the earth’s surface.

The colour and shape of the lights depends on the altitude, and which elements they come into contact with.

Part of the thrill of catching a glimpse of this natural phenomenon is that it’s so unpredictable.

No matter what corner of the earth you choose to go light-seeking in, there is never any guarantee the lights will appear at all, or what form they’ll take.

The downside of going on a quest in search of the aurora borealis at the moment is, of course, that everyone else is ticking it off their bucket list this year too, so crowds are often dense and costs are usually high.

You could save a few quid by heading to Iceland to catch them, as the country’s post credit crunch prices will work in your favour, and a handful of budget airlines such as WOW air and easyJet have direct routes from London.

There are a number of places from which to catch a sighting, including Snaefellsnes Peninsula, a narrow and isolated strip of land that stretches out from Iceland’s west coast.

The location makes it a great vantage point from which to see the northern lights and during the day there’s plenty more to feast your eyes on – a  volcano, lava fields, glaciers, waterfalls and a rugged coast dotted with fishing villages. 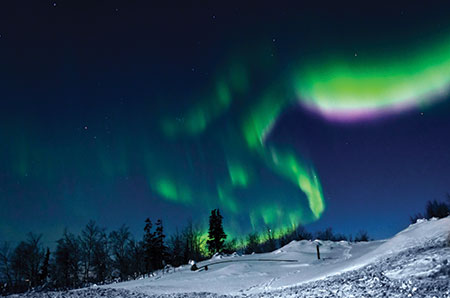 Just how badly do you want to see the nothern lights this year? Badly enough to brave a bone-rattlingly freezing Siberian winter?

If you can handle the cold, head to Murmansk in the Kola Peninsula, which is a key viewing area. Most tourists stay here but drive out to the Lovozero settlement in the hope of seeing the aurora borealis, as it’s a good distance from any potentially interfering light sources from the city. 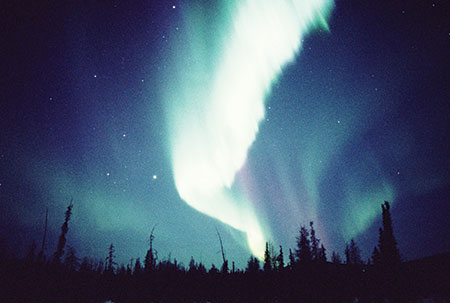 Most aurorae occur within a geographical area called the ‘auroral zone’, a ring-shaped region around the North Pole with a high rate of occurrences and activity.
At Fairbanks in Alaska, which is squarely inside this zone, you’ve got one of the best chances of seeing the lights and naturally the further you get from the city the brighter they’ll look.
Use the University of Alaska’s northern lights forecast site to plan your visit.
gi.alaska.edu/auroraforecast 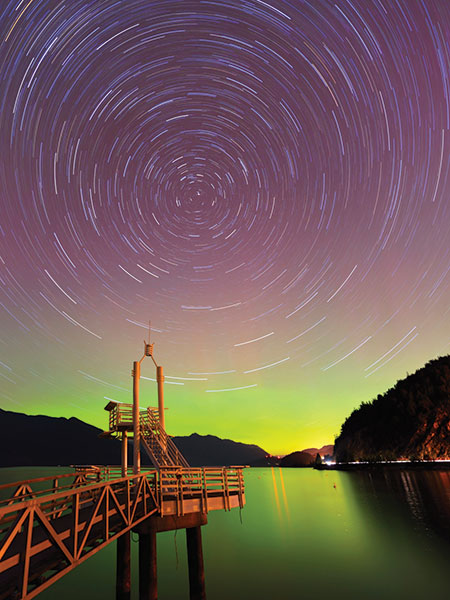 In British Columbia’s Provincial Park, it’s possible to capture the stunning lights set off beautifully by star trails, such as in the photograph above.

While what you see with the naked eye clearly won’t look exactly like this (star trails, or the motion of stars, are photographed with long-exposure times of up to 15 minutes), the colours here have been particularly rich over the past few months, with the variety of shades including red, yellow, green, blue and violet. 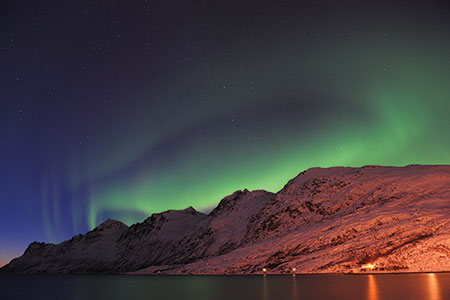 The northern town of Tromsø is another popular place within the ‘zone’ and is known for the swirling green lights which often light up the night skies here.

The earth’s rotation means that Tromsø moves into the northern lights zone around 6pm and leaves it between midnight and 2am, so there’s just a short window in which to catch them.

But the good news is at least you don’t feel obliged to stay up all night in the cold.