David Hill, a 27-year-old designer from St Helens purchased an iPhone 5 through O2’s website, which advertises a price of £299 for the 32GB handset. 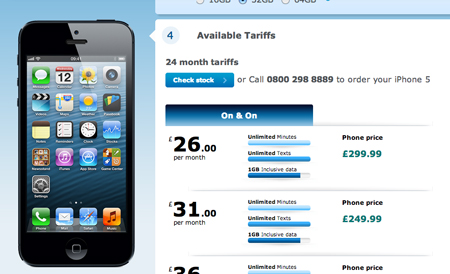 However upon arrival, the invoice included in the shipment showed the £299 price of the phone plus an extra £60 VAT, bringing the price to £359.99.

When he contacted O2 customer services Mr Hill says that they claimed not to be able to access their own website and refused to refund him the VAT he believes he’s been charged twice.

Hill concluded: “All I would like is my handset for the £299.99 I was sold it for online, in store and on the phone.”

An O2 spokesman said: “We would never intentionally mislead anyone on our prices and we apologise if there has been any confusion on exVAT pricing on our website.

“We are looking into what we need to do to make this clear for customers.”

However when TNT rang O2 and asked to buy an iPhone 5 for the £299 price we were advised that the £299 is inclusive of VAT.

UPDATE: Mr Hill has been refunded his £60 by O2 which has said it will make pricing clearly on its website.