On its website, occupywallst.org, the group said Thursday’s march was in “commemoration of 2-Months Since Birth of the 99% Movement.”

More than 300 arrests were made, many of them near the New York stock exchange, which was the focus of the march.

Occupy Wall Street protesters have criticised the police, who turned out in riot gear with helmets, batons and shields. 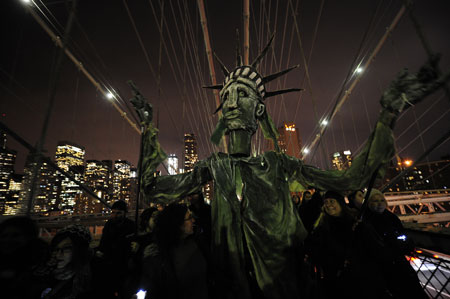 According to those in the Zuccotti Park camp, police used excessive force when clearing the two-month old tent city.

“The police played their role. I wouldn’t call it respectful,” one protester told AP. However, police say the tactics have been necessary to control the sometimes-violent protesters.

The Day of Action will be seen as a sign that the Occupy movement is still going strong, despite the encampment being broken up two days ago. Ranks were swelled by a turn out from the unions.

“This is a critical moment,” a demonstrator told AP. “It seems like there’s a concerted effort to stop the movement, and I’m here to make sure that doesn’t happen.”