Offside in Africa: The 2012 Africa Cup of Nations

This weekend, the colour and chaos of the Africa Cup of Nations reaches its climax with Sunday evening’s final. The tournament, contested every two years, is a fitting celebration of all that the continent offers the football world, but also reinforces many of the pitfalls – specifically, vulnerability to corruption and cronyism, and sometimes – shambolic organisation – that have so often prevented Africa taking its seat at the top table of global sport and, in fact, have held it back developmentally.

Ian Hawkey, the author of an enthralling book about African football, Feet Of The Chameleon, acknowledges both the tournament’s importance and the forces which conspire to undermine it.

“The quality can fluctuate and there’s sometimes a tendency to romanticise African football and maybe disguise some of its shortcomings,” Hawkey concedes. “The 2010 tournament in Angola, for instance, was poor, but this one [in Gabon and Equatorial Guinea] has been quite a bit better.

“It’s very important for most of the players and a lot get cross that it’s derided by their European clubs, for whom the tournament comes at an inconvenient time in their seasons.

In the sweeping narrative of African football, there’s no doubt the past 20 years or so have seen a quantam leap in professionalism. It is, according to Hawkey, mostly attributable to the increased number of African footballers plying their trades at Europe’s top clubs, as well as a concentrated effort by the international fraternity to drag the African game into the 21st century.

“There’s no doubt, for example, that Cameroon’s Samuel Eto’o is a better player for having gone to Barcelona and Inter Milan. 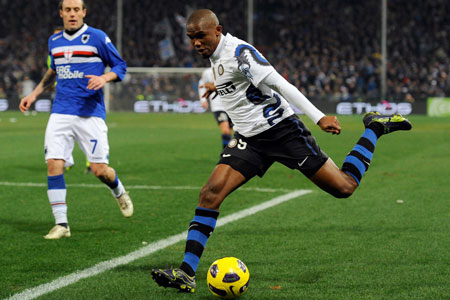 “Also, most African countries have come into more resources when it comes to the development of sport.  Fifa, although a flawed organisation, has committed more money and training – in most African nations, the quality of pitches, stadiums and coaching has improved.”

As is often the case when it comes to sport, particularly in Africa, discussion of onfield exploits is silhouetted by attendant concerns about despots seeking to leverage the spectacle for political advantage. Indeed, the Africa Cup of Nations has become one of the biggest flashpoints at the intersection of politics and sport. Consider that the next edition of the tournament – to be played next year as part of a rejigged fixture – was initially to be hosted by Libya. Given the recent upheaval in that country, those plans have been revised, but the initial decision, affording Muammar Gaddafi a kind of piggybacked prestige, raises unsettling questions about the organisers’ priorities.

“This is an issue,” Hawkey says. “The Confederation of African Football would argue that, in order to develop football, it has to take the tournament to as many different places as it can, often to places in need of development, which includes somewhere like Angola in 2010, which was just coming out of a horrible civil war and was rebuilding itself. As a result of the tournament being played there, Angola now has four new stadiums.

“But there’s the downside – what is the best way of using sport to make political gestures in the right direction? The hosts of this year’s tournament, Gabon and Equatorial Guinea, both have terrible human rights records – is it right to reward them with this kind of spectacle?”

It is, fortunately, possible to disapprove of Africa’s opportunist dictators without diminshing the exquisite skill of the continent’s finest footballers. And although the Premier League, La Liga and Serie A now teem with African players, Hawkey insists some of the finest exports belong to a bygone era, when players were obliged to represent the countries of their colonial masters.

“Eusebio was from Mozambique, but was born and grew up when his country was still a Portuguese colony, so he never represented his country,” Hawkey says. “He played mostly for Benefica and there was a period for maybe three or four years in the Sixties when he was the best player in the world.

“A Moroccan player, Larbi Ben Barek, was another who played while his country was a French colony, but he also played for Marseille and Atletico Mardid – he was a genius from what I’ve seen.” 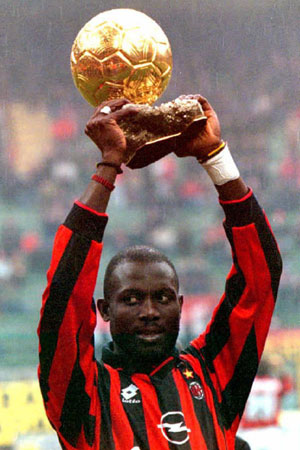 Of more recent players, Hawkey admires Liberian George Weah – a star for Paris Saint-Germain and Inter Milan who was crowned World Footballer Of The Year in 1995 – and Eto’o, but not so Chelsea’s Ivorian striker Didier Drogba.

“Eto’o, for sure, is the best African player this century.  Drogba, I think is tremendous but doesn’t quite have the range of skills of some of those other players,” he says.

“It’s quite tempting to put Cameron’s Roger Milla in there – he was doing it for so long and he charmed a World Cup at age 38 [in 1990 in Italy], but he was also the best footballer in Africa in the 1970s, so he didn’t just emerge later on – and he was probably the first African player to really conquer European football.” 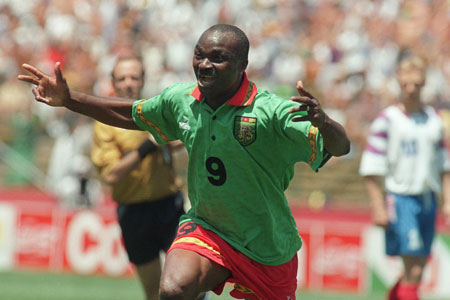 Click for more on Teodoro Obiang, the dictator in power in Equatorial Guinea

The president of Equatorial Guinea, Teodoro Obiang, has been in power since 1979, so it’s fair to say his tiny, oil-rich country in Africa’s armpit is not exactly a beacon of representative democracy. 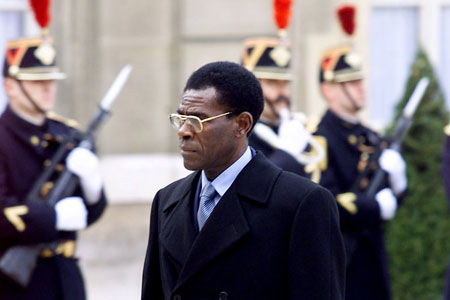 Obiang (above) was head of the country’s notorious Black Beach prison, which had a reputation for torturing prisoners, and later launched a coup to oust his uncle, Francisco Macías Nguema, who was subsequently executed. Obiang is one of the world’s wealthiest heads of state, with an estimated net worth of £380m, and refers to himself as El Jefe, meaning “the boss”.

There are no newspapers in Equatorial Guinea and all the broadcast media are either owned outright by the government or controlled by its allies, many of which have proclaimed Obiang as a god. Obiang is on record as asking, “What right does the opposition have to criticise the actions of a government?”

A bit stiff: Costly condoms fetch £500 a box in Venezuela

150 years of Alice in Wonderland