London has no shortage of amazing buildings and this weekend the doors are flung open to the homes, offices, clubs and sites normally off-limits to the public.

Hundreds of places will be accessible during Open House – the annual showcase of excellence in architecture and design – but to make things easy, we’ve selected the best.
Entry to every building is free, but each has different entry arrangements – some need to be pre-booked – so check out the excellent openhouse.org.uk/london.

One of the most amazing offices in the capital is the groundbreaking Lloyd’s of London, EC3M 7HA. Its inside-out design was truly revolutionary.

Discover the stately HQ of the people trying to save us from economic meltdown at the Bank of England, EC2R 8AH.

Take a trip to the top of Tower 42, EC2N 1HQ, the City’s tallest building.

For a super fancy new office block it’s hard to pass up 201 Bishopsgate and The Broadgate Tower, EC2M 3AB.

Tower over the heart of the West End and Oxford Street from the top of Centre Point, WC1A 1DU.

Be taken back to the regal trappings of the period when Britain ruled the world at the Foreign Office and India Office, SW1A 2AH.

That global sovereignty came from an all-powerful navy – check out the grand state rooms of the former Admiralty Buildings at 26 Whitehall, SW1A 2WH.

Once upon a time gentlemen’s clubs were exclusive places for upper-class blokes to recline in deep leather couches, sip whisky and plot world domination – nothing to do with strippers of course. The Reform Club, SW1Y 5EW, is one of the finest of these institutions.

For a touch of 1920s glamour have a good look around the five-star Grosvenor House hotel on Park Lane, W1K 7TN.

The Hurlingham Club, SW6 3PR, is a lavish, posh and beautiful private members’ club with a magnificent clubhouse, 42 acres of manicured grounds, croquet lawns and a cricket field.

An acre and a half of beautiful gardens in the middle of Kensington – on a rooftop. Cool. The Roof Gardens and Babylon Restaurant, W8 5SA, are just off High Street Kensington.

Trellick Tower, W10 5UT might look ugly, but it’s a remarkable piece of architecture. It was designed by a bloke called Erno Goldfinger, and is a much sought-after place to live. 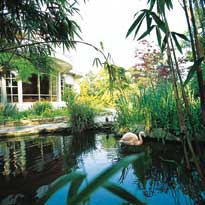 One of the swankiest homes you’ll ever see – it’s spread over four floors and overlooks Highgate Cemetery – is 85 Swains Lane, N6 6PJ.

Anyone who likes subterranean shenanigans and war history will enjoy the Underground Bunker in Dollis Hill, NW2 7DZ. It was used by Winston Churchill during World War II.

Find out where the first TV broadcast was made by visiting the Theatre and Television Studios at Alexandra Palace, N22 7AY.

Most of us climbed in trees as kids. The folks  at the Tree House, SW2 5DJ, live in one.

Enormous slabs of concrete and giant blocks of grey – yes, it must be what’s known as ‘brutalist’ architecture. Great examples of it are the National Theatre, SE1 9PX, and its Studios, SE1 8LL.

See how spectacular someone’s back shed can get at the Garden Pavilion, SW4 0NH.

Have a peek at Europe’s biggest construction project, the 2012 Olympic Park, E10 5JY, and find out where billions of taxpayers’ pounds are going. There’s also an Olympic Park Viewing Gallery, E15 1QN.

If an army marches on its stomach it’s easy to see how Britain helped to win two world wars when you tour the Station Officers Mess at the magnificent Royal Artillery Barracks, SE18 4BB.

The Devonport Mausoleum, SE10 9NF, built in 1750 and restored a decade ago, should make for some ghoulish viewing. 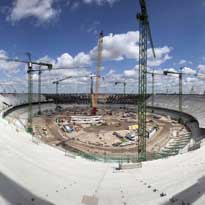 Theatre Review: The Goat, or Who is Sylvia?

Ken Livingstone: ‘Jews won’t vote for me because they’re rich’