Opinion: Australian election 2013 aka ‘The Great Twerp Off’

Plastic bags, Stoke-on-Trent, freeze-dried soup, my grandmother’s taste in interior decoration, clothes horses – it’s hard to think of many more things less inspiring than this Australian election. It’s all but impossible to get excited when your choice is between, at the height of varied criticisms from all corners, a psychopath and a sociopath (I’m sure you can work out who may be who).

Let’s begin with the likely incumbent, the Liberal leader Tony Abbott. An oily-faced crag of contradictions. A genuine high-achiever who won a place as a Rhodes scholar to The Queen’s College, Oxford, and yet doesn’t know the difference between an anally ingested medicine and a repository.

Before Abbott has even been elected he feels like an anachronism, not so much in the George W Bush mould, but as something before that; slick-haired, unpalatably handsome, running on a narrative of, “Look how much they’ve ruined everything,” when actually by most objective measures things have only improved in Australia. Abbott is every inch Australia’s Ronald Reagan.

His charm even springs from the same place as Reagan’s. He’s a genuine person, who holds his albeit retrograde ideals and beliefs in good faith. It’s that almost naive integrity that makes him popular.

Or there is Kevin Rudd, a man whose arrogant leadership style saw him ousted by his own party despite strong public ratings. A man who continually undermined the leadership of Julia Gillard and made Labor look like they were more concerned with infighting than running the country, the one thing the public despise more than anything.

It wasn’t Rudd’s influence alone that led to Gillard’s dire poll ratings (plenty of good old fashioned misogyny doing much of the legwork there), but his actions helped, and then he exploited the ratings to grab power back with the elections looming – that’s cynical politics.

Having lived through Europe’s lurch to the right following the financial crisis, I feel loath to see Australia go the same way, but Labor have only got themselves to blame.

Agree or disagree? Are the candidates inspiring? letters@tntmagazine.com 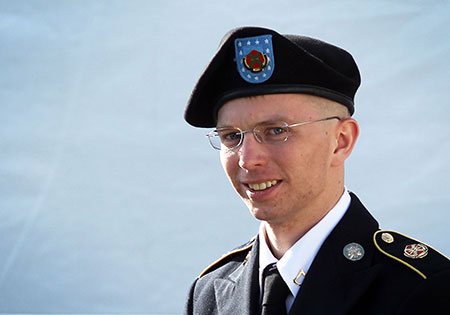 There was a collective ‘umph’ in the Twittersphere last week when Bradley Manning was handed down a 35-year jail term after being found guilty of a string of offences.

That ‘umph’ became a ‘oooh’ on Thursday when a statement from Manning said he would be living henceforth as Chelsea Manning.

It has long been known that Manning had struggled with issues regarding his sexuality. Indeed, in the web chats that landed Manning in jail, he confessed to the hacker Adrian Lamo of his deep alienation among his macho colleagues in the army.

For those who’ve followed the case closely the announcement came as an unexpected and fittingly different silver lining. It takes a profound kind of strength to be handed a 35-year prison sentence for essentially a crime of conscience and then respond with, “OK, but you can call me Chelsea from now on.”