Outdoor London events: ‘Tis the season for rooftop shindigs and frolicks in parks

Among London’s outdoor offerings this sunny season – from rooftop film clubs to open-air theatre and fields of festivals – the Tutti Frutti boating lake at Kew Gardens has got to be one of the more bizarre.

Part of the heritage site’s IncrEdibles fest, billed as a “voyage through surprising edible plants”, the colourful centrepiece has been created by culinary artists Bompas & Parr.

That it’s a mite surreal should come as no surprise, then – these are the same folks who created a musical spoon specifically for eating Heinz beans with, using the principles of bone conductivity to transmit a specially composed soundscape into your inner ear as you munch. True story.

Kew’s head of festivals, Vicky Brightman, explains: “It’s a piece of art that doesn’t exist without people – it’s really immersive, vibrant and bright. Even if you don’t want to get in a boat, it’s nice to watch other people on the water, and you can just wander onto Pineapple Island and relax.” 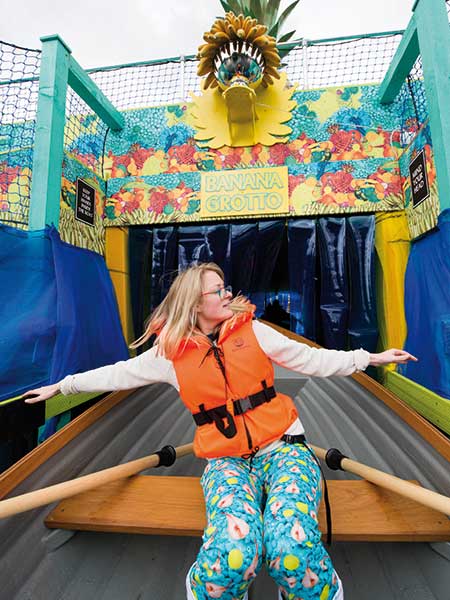 It’s bananas: a rower readies to enter the grotto

She adds this is the first time Kew’s Palm House pond has been used as a boating lake since 1755, which means you can help make a piece of particularly odd history if you do decide to pick up a paddle.

IncrEdibles, which also features a Global Kitchen Garden to show off more than 90 varieties of edible plant, is just one of the Unesco-listed botanic gardens’ summer specials, with Kew the Music and Kew the Movies also kicking off on the lawns on July 9 and Sep 12 respectively.

Catching the likes of The Human League, Leona Lewis, The Rocky Horror Picture Show and Dirty Dancing here with picnic basket in hand will be a quintessentially English experience – “it really is an exceptional backdrop,” promises Brightman. 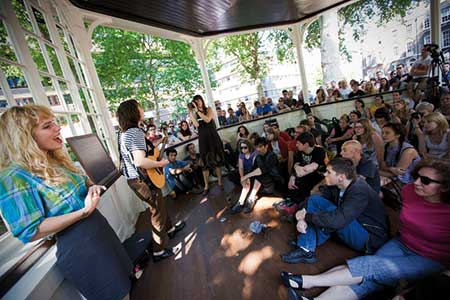 Founded by a couple of guys from Edinburgh, Ian Sutherland and Tom Muirhead, back in 2008, what started out as a pet project – inviting up-and-coming bands to play acoustic sets at disused bandstands across London – has become something of a phenomenon, with major names such as King Creosote, Emmy the Great and Mercury winner Speech Debelle all making appearances over the years.

“On a sunny day we’ll get about 300 people turning up to watch,” reveals Sutherland, who adds he’s aiming to put on a busk a month throughout summer. “There’s this mini festival atmosphere, and it’s an intimate setting, sitting at the feet of a band playing acoustically. It’s really stripped back, really raw.”

For now, Bandstand Busking is sticking to its original formula (setting up shows ad hoc and tweeting the details just before they start), but the concept is likely to progress.

“I got an email from a guy in Mumbai this morning about starting it out there,” Sutherland tells us. “So watch this space.” We reckon they’re going global. 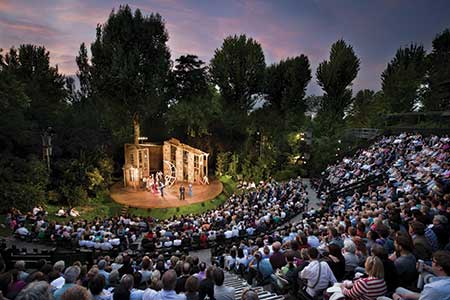 This beautiful amphitheatre is perfect for catching one of the classics during this summer’s season, which includes The Sound Of Music and To Kill A Mockingbird.

The relocated, renamed Greenwich Comedy Fest moves from the historic parks of the Royal Navy College to Allen Gardens adjacent to the culture throb of the East End.

Apart from that, it’s business as usual as the top comedians in the land – Alan Davies, Aisling Bea, Andrew Maxwell, Craig Campbell, Ed Byrne, Jarred Christmas, Rich Hall, and more – go for the comedy jugular in the Big Top. Add in live music in the bandstands, and street food galore, and you’re sorted.

Part of the arts and  community centre’s Beyond Barbican programme, this line-up of music, theatre and dance takes to Hoxton Street – the site of the weekly Saturday market – for a culturally diverse weekend in the city’s capital of cool. The Barbican’s programming the second day, too, but the schedule is still TBC. 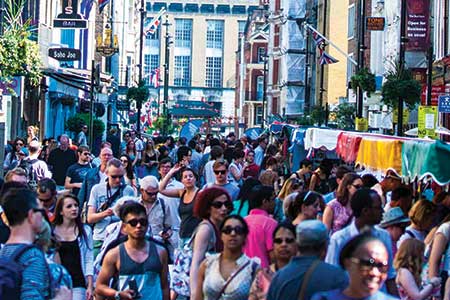 This all-day event on Dean Street boasts market stalls alongside music and comedy. After its inaugural run last year it returns this weekend with a top notch line-up of creative stalls covering everything from fashion and art to home furnishings and food stalls, including Aussie deli Speck Mobile, stand-up Peter Halpin, plus Asya and Passport to Stockholm among the 10-strong musician line-up. The sort of shopping blokes can get on board with!

Nike+ Run to the beat half marathon – Greenwich

This charity half marathon with music has tune stations along the 13.1-mile route, and a headline set at the Greenwich Park finish line to celebrate. This year’s line-up is still yet to be announced, but Calvin Harris and Tinie Tempah have played previous years.

A spectacular spot to catch an open-air screening, Somerset House once again hosts this season of movies old and new, plus DJs and food. Bring your own blanket! 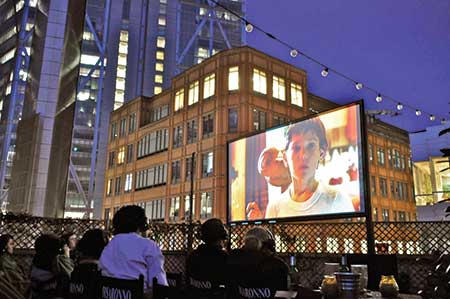 The Rooftop Cinema Club – Across London

This rooftop movie club has two venues in London – one in Kensington and one in Shoreditch – and screens some of the finest celluloid creations.

Cult to comedy, action to romance, the line-up, including Ben Affleck’s Argo, Darren Aronofsky’s Requiem For A Dream and Ryan Gosling weepie The Notebook, takes in new releases, beloved oldies, and everything in between, as you settle in above the streets, surrounded by panoramic views. The Shoreditch venue also hosts silent disco nights and pub sports days.

This eye-catching event has kite demonstrations from Brighton Kite Fliers and Spectrum and Cascade kite display teams, with specialists The Highwaymen on hand with all kinds of kites for you to purchase and get in on the action with. There will also be homemade Asian cooking, a hog roast, and loads of smiley, community-focused goings on. Aah.

The Globe is a reconstruction of the theatre as it would have been in the Bard’s day – down to the lack of roof but with the addition of some nice draught lager – and is one of the finest places to get ’Speared. This summer’s season includes Macbeth and King Lear. 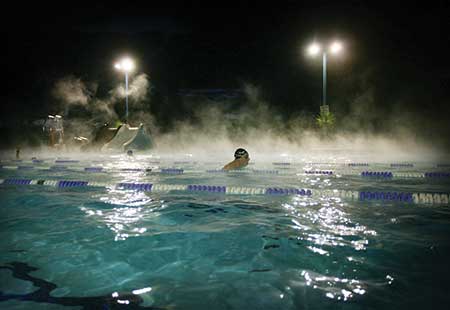 There are loads of great places in London for an outdoors dip, such as Tooting Bec lido, which is the largest outdoor pool in the UK. If the English ‘summer’ is not quite warm enough for you, head to Hampton Pool – it’s outdoors, fully heated all year round and sees Midge Ure (July 26) and The Zombies (July 19) at its poolside concert series.

This two-day event is held in the Queen Elizabeth Olympic Park in east London to honour the sound, style and attitude of the East End on the one-year anniversary of the Olympic Games.

There’ll be a cutting edge Eco Design Fair, for all your sustainable needs, an Art Car Boot Fair, and a Real Food Festival. With pop-up theatre, music, comedy and more, it’s the best way to honour this most vibrant part of the capital. 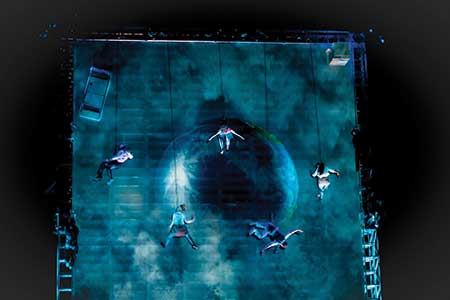 A mental 10 days of UK and international outdoor arts incorporating theatre, dance and, above all, spectacle. Last year saw giant insects walking along the Roman Road and this year promises to be even more nuts. Bungee-assisted aerial dance group Wires Aerial Theatre (directed by Aussie Nigel Jamieson) kickstarts things with a stunning assault from the skies, As The World Tipped.

Posh, yes, but also beautiful and spectacular. So leave the suppositions at the door and embrace your inner horticulturalist at the world’s biggest annual flower show. Grab a glass of champers and strawberries, too, while you’re at it. 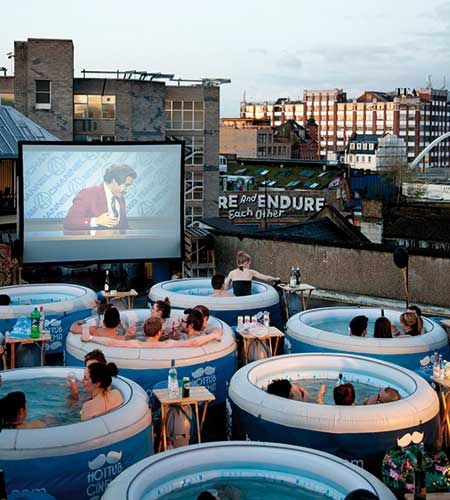 An outdoor cinema at which you’ll stay warm whether the English summer hots up or not – why, this is genius! The ‘Summer of Tub’ kicks off on June 6 with a ‘Best of British’ season (think The Italian Job, Trainspotting) and will run all the way through ‘til September.

It’s exactly what it says on the tin – a ticket gets you a seat in a hot tub on the roof of Rockwell House, and there’s barbecue food, cocktails and tub-side service to complete the luxurious experience. Can you think of a better way to take in a movie this summer? Thought not.

The hippest square in the hipster land of Dalston (the building in the corner is ambitiously called the Dalston Culture House) is the setting for these two days of live music and dance workshops. Full details are yet to be announced, but if last year’s absolutely packed programme is anything to go by, you’ll be spinning like the lead in the Street Dance movie before the day’s out.

Get some proper culture in you for a change, in the shape of this opera al fresco series in the picturesque west London park. The operas taking to the stage include Puccini’s Madama Butterfly and Leoncavallo’s Pagliacci, performed in a double header. And yes, you can have a beer, too.

This roaming cinema visits Fulham and Forest Hill’s Horniman Gardens, screening the likes of School Of Rock, The Neverending Story and Stand By Me.

Melbourne ad goes viral with over a million views