In a corner of the Grace Emily Hotel, somewhere between the front bar and the beer garden, four young men in tight black jeans and carefully groomed facial hair are moving amplifiers into place and tuning their guitars. A few punters stand around, sipping pots of local beers (pots, pints and schooners – I’m struggling with the differentials) and glasses of wine, patiently waiting.

You wouldn’t say the anticipation in the air is palpable, but the house music isn’t exactly filling in the gaps between conversation quite as well as it hould be and a little background music would be appreciated. It’s Saturday night in Adelaide, and I’m trying to remember 14 new names and faces – besides, small talk isn’t really a strong suit of mine.

There are already a few rumours flying around amongst my new tour group that we’re all heading out on the town proper. Tull (the easiest name to remember because, well, he’s the only Tull I’ve ever met) and a couple of returning Adelaide locals are trying to drum up a bit of support to hit a club or two further into town. “C’mon mate,” Tull says to me over a pot of South Australia’s finest (Coopers, of course).“It’ll be a bit of fun, we’ll be able to get to know each other!”

“I don’t know about it, to be honest,” I say, looking down into my beer. I feel like such a wet blanket. “We’ve got to get up at, like, five tomorrow morning.”

“Man up, buddy,” replies Tull. “You can just sleep on the bus, anyway!”

Thankfully, the band – The Rodents, according to their drum skin anyway – kick into their first song and it provides the distraction I need to slip quietly out of the Grace Emily and down the street. I’ve got an important date with a surprisingly comfortable YHA dorm room bottom bunk. 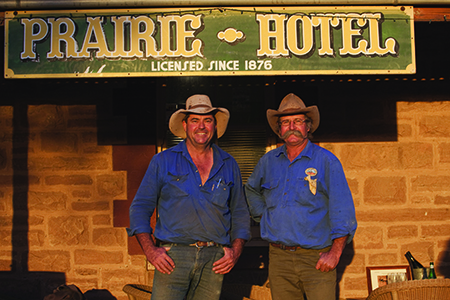 On a wine and a prayer

From a distance, the oldest winery in the Clare Valley looks more like a church than it does anything else. There’s a couple of pretty good reasons for this; one being that Seven Hills Winery was established in 1851 by a group of Jesuits who had settled in the area to plant vines and produce sacramental wine, the other being the fact that the church-like building that I had spotted in the distance is in fact a church. What a genius I am…

Clark, our tour guide, stands up and tells us that we’ll be having a personal tour around the Seven Hills cellar, visitors centre, vineyards and then a wine tasting. It’s hard not to laugh when some of the slightly pale faced and blearly eyed amongst the group groan collectively at this last piece of information.

A lovely lady escorts us down into the enormous wine cellars beneath the winery itself. The cellar is deep underground and is full of huge barrels stacked side by side in rows. We all snap some photos; one or two of the group lie underneath the barrel’s big taps and pretend to drink from them. Queue giggles.

It’s not surprising that – with its historically close and consistent association with Jesuit missionaries – Seven Hills Winery has a very calm, even spiritual feel to it. I peel off from the group and wander trough rows of Riesling grape trestles by myself for a little bit, feeling rather at peace with the universe. I could murder a glass of something though.

It must be said that the Jesuits definitely know their way around a grape. The wine tasting is easily my favourite bit of the tour. For some of last night’s clubbers however, the same it seems cannot be said.

The first glass put in front of me is a lovely, full-bodied Cabernet Sauvignon. I don’t sip it so much as chug the thing down in one gulp. “You know, we’ve got spit buckets there for you, if you need it,” our winery guide says, looking at me over her glasses. “It’s okay love. I’d hate to waste any of it.” 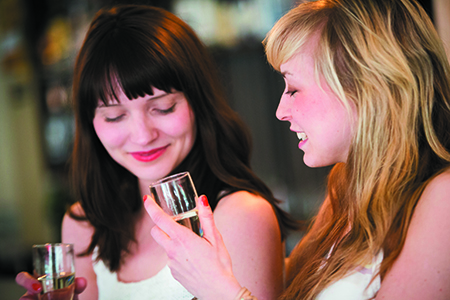 Goats in the bush

The Flinders Ranges National Park has long been a source of inspiration for painters of landscapes. I unfortunately am not possessed of such gifts – the ability to capture for posterity the beauty of places with paint on canvas – so I must try and use my words.

“Jesus,” says Tim, who’s sat next to me. “This place is a bit of alright, isn’t it?” I couldn’t have put it better myself. We’re driving towards Mount Remarkable in the heart of the National Parklands, with beautiful, gradually rising wooded slopes on either side of us. Every now and then someone squeals or yells out in delight when they spot wallabies, kangaroos amd even a few emus frolicking on either side of the road.

As the sun begins to dip below the rolling ranges around us, we pull up at campsite deep in the eucalypts and file off the bus. The orange light of the setting sun diffuses in glittering streaks through the trees and the air is heavily scented with the smell of slightly damp earth, bark and, of course, eucalypt oil. It’s definitely a good place to be if you’ve got a blocked nose.

We were supposed to hike up to the top of a hilly spur which is bizarrely called the Dutchman’s Stump – don’t ask – but, due to time restrictions, Doc and Clarky decide to take us up to the top of Warren Gorge instead. We set off in single file on the loose, shale path. The Flinders Rangers Ranges are hundreds of millions of years old and have been exposed to so much wind and water erosion in that time that the insides of these hills, the lime and sandstome beneath them, have been exposed to the elements and have broken up. It makes for a fairly interesting walking surface.

Suddenly and without warning a collection of scrubby bushes and bent trees away to my right, about 10 or 15 metres below me, begins to quiver and shake. The line stops, everyone excitedly poised with our cameras ready to capture the emergence of some species of beautiful, unique Australian marsupial wildlife.

Nope. Instead, a herd of maybe eight or nine massive goats come trotting out of the scrub. “Sorry, folks,” says Clark, laughing. “For every one rock wallaby or wombat you get up here there are probably 100 goats.” We scrabble up the last of the uneven path, to the top of Warren Gorge and, after what seems like an age, we emerge at the top. We’re met by a view of the last rays of the setting sun dipping below another distant line of hills across the gorge. Spectacular doesn’t even begin to describe it. If only I’d bought mybox of oil pants and an easel. 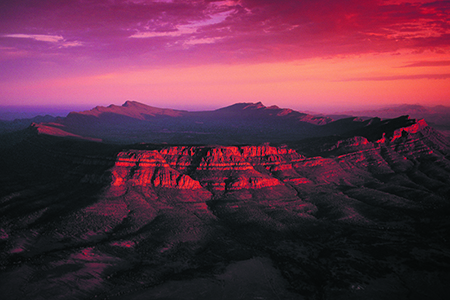 Getting a little bit Quorny

“Any of you’se blokes ev’r been to Port Pirie?” A large, rather sweaty road train drivers asks. His shirt is buttoned down to about where his beer belly begins (he does spend most of his time sitting down after all) and you could count the teeth in his head on one hand with enough fingers left over to action grip a hefty fountain pen.

We’re at the Criterion, one of four pubs in the quaint, South Australian town of Quorn, on the edge of the Flinders Ranges NP. It’s a weeknight, about eight or nine in the evening. While it’s technically a school night, we’re all on holiday so we’ve headed out on the town and now I’m getting to meet some of the colourful local characters. Jess, a lovely Irish lady in my group has made herself this new friend and has dragged me into the conversation, presumably so she can extricate herself from Port Pirie’s attention.

“Ah, no, “ I respond, miling nervously. “Pirie, what, like the chicken?” My new mate doesn’t quite get it; I suppose they don’t have a Nando’s in Port Pirie. The arrival of a bunch of fast-talking city slickers in ‘trendy’ jeans, t-shirts and skirts has driven the majority of locals out onto the stoop out front, where they sit drinking and smoking in their cowboy hats and work boots. Not Old Mate though, something about Jess has definitely sparked his interest.

“Ya should definitely try’n get there, mates. It’s a ripper of s spot!” With this helpful bit of tourist information in mind, I return to my lukewarm Coopers stout and, when Jess tries to leave, I grab her arm and make her drag me away too.

There’s something incredible about drinking in an outback pub though. Even while the locals look at you like you’ve just come down off of another planet, they’re all pretty friendly and I’ve rarely seen a landlord look so delighted at the prospect of me ordering a beer as John, the Criterion’s owner does. The night soon gets fairly out of hand; one of the group somehow sweet-talks John into letting them come behind the bar, the felt in the pool table gets ‘inexplicably’ ripped (I’m not very good at pool either) and, as I’m stumbling home, I walk head first (chin first, actually) into a telegraph pole while looking up at the stars. The stars in outback South Australia are unbelievably beautiful. We’re off to summit Wilpena Pound tomorrow…

My stomach is churning slightly at the thought.

This was part of a seven day Adelaide to Alice Springs tour taken with Adventure Tours Australia. For more information on this or any other tour, visit their website here: adventuretours.com.au

Meat-free Christmas: Vegetarian and vegan cooking in the festive season

Lovebox in London this weekend

Causeway to the Mount