Oz Feature: Roadtrippin’ into the sun

About halfway up the mountain, the muggy heat gives way suddenly as the low clouds roll in. Rain pelts from the sky and the loose shale track that meanders between prickly scrubs and gnarled trees turns treacherously slick underfoot. In the sapping heat of midday, the climb had been ardurous enough, but now, with the rain falling relentlessly, the going has become downright dangerous.

One step at a time, our group of 18or so had set out from the old-growth eucalypt forest at the foot of the 923 metre high Mount Ohlssen-Bagge, which comprises one side of the beautiful Wipena Pound right in the heart of South Australia’s Flinders Ranges National Park.

We’d formed a column as we came to the mountain’s foot and Clark, our tour guide (and a former army man) turned to us and said, “We’re going to do a few climbs over the next few days but this is definitely going to be the most difficult of them. If you don’t think you can handle it, now’s the time to say no you can sit it out, because once we’re up there, you can’t just turn back.”

Well, how hard could it be?

An hour or so later and I am finding out. Andra – one of our group- is inching ahead of me, her hands scrabbling at sodden red earth, her back bent to the opened heavens. Clark, and a section of the more intrepid, sure footed souls have forget ahead while the majority of the others appear to have fallen away behind us; their disembodied voices, muffled by rock, scrubby bush and trick mist, the only indication that they haven’t plummeted to an untimely demise. Andra and I stand, for a moment, alone.

“Should we maybe wait for the others to catch up?” I ask her, taking a sip from my water bottle and wiping a peculiar mixture of sweat, red mud and rainwater from out of my eyes.

“Don’t be such a bay”, she replies with a smile, taking a swig from my bottle before hauling herself over a boulder back onto the trail on the other side “We’ll be up there in a minute.” Fair enough.

Ten or 15 minutes later and the incline seems at first to plateau, before flattening completely. The huge boulders and treacherous shale of the path we had been following give way to stunted, prickly bushes and, joy of joys, hard packed earth.

Sure footing at last! 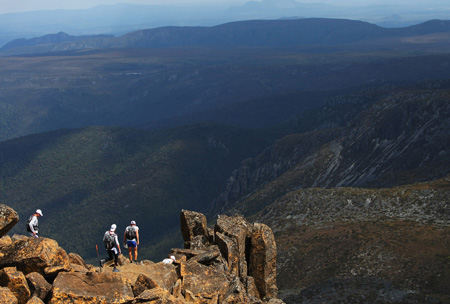 In for a penny

It’s only now, with the centre of the pound stretching out before me in one direction and the Flinders Ranges away in the other that I can finally let the whole view just wash over me. It is, quite simply, stunning.

We all take a few moment to let it sink in. From the top the vista is quite literally breathtaking(although, I suspect that might have had something to do with the climb). If you’re ever in need of a literal definition of the term ‘rugged beauty’ then the sloping mountains and rolling eucalypt forests of the Flinders Ranges – and Wilpena Pound in particular – is the perfect place to go and see it for yourself.

Clark takes 18 photos of 18 separate cameras and, in that moment anyway, it feels like we’re on top of the world.

We’re only a few days into our trip and this is the perfect icebreaker – a shared feeling of accomplishment and awe that prompts spontaneous hugs, high fives and laughter.

Now we’ve just got to get back down… 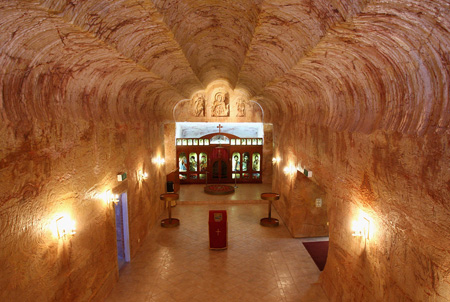 Time, as one marks it usually anyway, seems meaningless down here. The darkness is the same when I close my eyes as it is when I open them again. I have been asleep an hour, a day, a week, a year even? From my bunk bed I can feel the groves made by the diggers in the sandstone walls, feel the granules between thumb and forefinger when I rub them together.

Craving water, I stumble about in the perpetual twilight – in the floor strangely cool under my bare feet. I rip back the curtain dividers and shiled my eyes suddenly against a single point of light, more than 50 metres ahead of me.

One hand across my face I’m walking stumbling towards the light. Slowly, gingerly, I hear voices, calling, laughing, howling. My eyes adjust as I burst through, into the open and see the endless desert stretching away before me. Needless to say, spending our first night underground in Coober Pedy can be a slightly disorientating experience.

If, one day in the future, mankind builds cities on the surface of the Moon or on Mars than I imagine they might look to bring along Coober Pedy’s town planner for the ride. From one of the few high spots in the predominantly flat, lunar landscape, a few single story buildings can be seen peeking above the red-earth surface. That’s because the vast majority of this town of over 1,500 inhabitants live underground.

It is hard to talk about Coober Pedy without also talking about opals – this is the ‘opal capital of the world’ after and all and the precious mineral is the whole reason that a town exists here at all. Opal has be mined in this part of the world for nearly 100 years and along with the associated tourism industry, provides the vast majority of Coober Pedy’s employment opportunities. 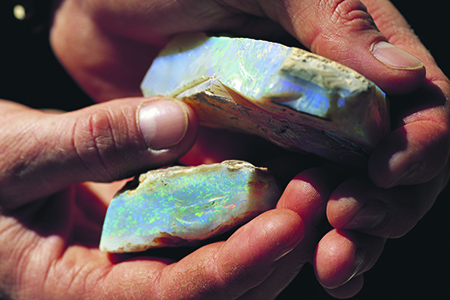 Man on the Moon

Mining techniques have changed somewhat though in the last century, as we discover. We spent an hour or two fossicking earth with our bare hands, hoping to strike it lucky with a little nugget of colourful opal. All any of us seem to turn up is ‘potch’; common opal, which is worthless without the beautiful colours desired by jewelers. I take a few photographs though, including one of the first ever tree in the town, which is (fun fact) made entirely from scrap metal.

The mineshafts and, as we could learn, almost all of the houses (or dugout’s) are basically carved out of the living rock using giant machines. Once any and all the opal have been sifted and extracted, the miners then move in. For one thing, it’s much cooler underground than it is above the surface. Temperatures year round tend to stay in the low 30s, while in summer often rising into the 40s. Beneath the ground however the temperature stays at a very pleasant 23 – 25 degrees.

While opals and mining is truly interesting, the best part (for me anyway) of Coober Pedy comes at night. There’s something strangely life-affirming about drinking beers and dancing to John Mellencamp and Cold Chisel in a pub that is underground. 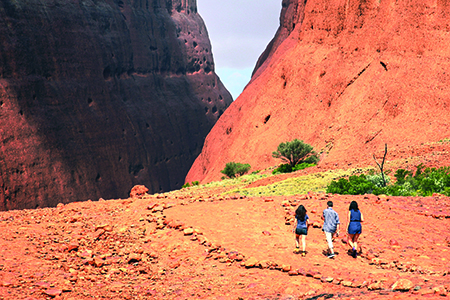 Next on the agenda is crossing the border into the Northern Territory. Doc and Clark pull the bus over and let those of us who aren’t asleep off, giving us a chance to stretch our legs. We have been driving for hours now, in the pitch darkness.

It is sometime after midnight and the desert air is crisp and cool – the darkness seemingly impenetrable but for the sparkling up above. The night sky in the Northern Territory is different, somehow, to anywhere else I’ve ever been – boundless, uninterrupted and completely alive with stars; millions upon millions of them, as far as the eye can see.

As first impressions of  a place go this is certainly one of the most humbling and beautiful.

Places like Uluru and, to a lesser extent I suppose, Kata Tjuta and even Kings Canyon have almost become clichés of themselves – a sort of international symbol of an Australia that so few Australians ever actually see. They are destinations now, used to lure tourists from all over the world into one of the more remote an, in many ways, inhospitable places on the planet.

Yet to stand in the shadow of Uluru as the un comes up and to watch its ancient surface, pitted and scared by the passage of millennia change from a kind of deep purple, trough every shade of dark to red to ochre orange is an experience you will never forget, of that I can assure you. So too is a trek trough the Valley of the Winds in Kata Tjuta, a sprawling network of gigantic primordial domes that tower into a crystal clear sky, pristine and cloudless. To stand at one of the viewing points and stare out at Mt Olga rising up from the scrubby desert floor in the distance.

Dinner on the last night in Alice Springs is a somewhat somber affair, because nobody really wants to go home. After a couple of glasses of wine though, the ‘Snake Man’ wanders into the restaurant and soon has us all holding various lizards, snakes and other reptiles. It’s a great spine of Australia, that is as beautiful as it is vast ad completely unique.

‘Australia is the sex capital of the world’: The Inbetweeners head Down Under