As the Bicycle Film Festival rides into town, TNT explores the capital’s love of two wheels attached to a frame

“Bikes rock!” cries Brendt Barbur, founding director of the Bicycle Film Festival. As I never leant how to ride one, I’m not best placed to know if this is true. However, given the boom in urban cycling in London, and how Barbur was inspired to launch the festival, I’m willing to give him the benefit of the doubt.

His love affair with cycling began, ironically, after he was hit by a bus while riding in New York City. Determined to turn this negative experience into something positive, he was inspired to create an event to bring together velophiles from all walks of life to celebrate their shared passion.

16 ways to celebrate cycles -A cyclist's guide to London

It’s a passion which for many Londoners is a way of life – bikes outnumber cars during peak hours on many busy commuter routes, and the ubiquitous Boris Bikes whizzing around are emblematic of our cycling revolution. Since last December we have collectively hired a whopping 7.27million bikes.

Other businesses have responded to this boom, with cycling cafes such as the super-trendy Look Mum, No Hands! springing up across the city. A Cycle-In Cinema has also been pioneered as ?a modern take on the drive-in, whereby visitors ride to a film screening, hook up their bike to to a generator and power the performance by pedalling.

This week, legions of enthusiasts from across Europe will flock to London to celebrate what Barbur calls “the world’s best invention”, when the Bicycle Film Festival returns to the capital for its eighth year.
The event doesn’t just encourage cyclists to ride, but also highlights the cultural context surrounding the lifestyle. It successfully merges the many cycling communities of road cyclists, mountain bikers, BMXers and cyclo-crossers, to name but a few, with creative communities of filmmakers, fashion designers, musicians and artists. 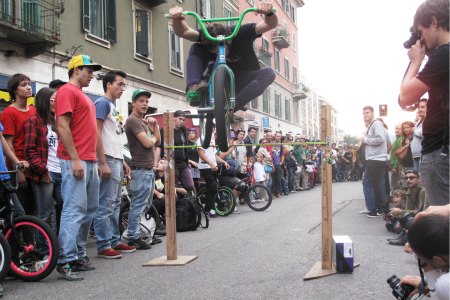 From its an initial one-off event in 2001, it has since evolved into an immensely popular, multi-faceted global festival, travelling to more than 25 cities, attracting some 300,000 attendees worldwide.
Films are submitted from across the world – from independents to well-known directors such as Spike Jonze. Their work is reviewed by a panel, which selects the best bike-related films to be screened. This year London will be hosting the UK premiere of Racing Towards Red Hook, the story of three cyclists competing in one of New York City’s biggest underground events, the 2011 Red Hook Criterium, an unsanctioned competition in which participants race through a desolate post-industrial area of Brooklyn.

Music, art and design play a crucial role in the festival, too. “There are so many passionate artists and musicians who are cyclists as well, and the BFF bridges these communities providing ?a platform for their work,” Barbur says.
Despite all these high-profile collaborators and celebrity supporters, “the bicycle is true the star of the BFF”, Brendt insists. “Go out there every day and ride your bike!” he urges me. His excitement is contagious and I eagerly promise I will, before remembering that I can’t in fact ride a bike, and guiltily catch the bus home instead.

Spas and hammams in Marrakesh, Morocco