It helped shape the Arab Spring, we’re told, played a pivotal role in the Occupy movement, and inspires citizen journalism (think Twitter breaking the news of the US Airways flight that crash-landed in the Hudson River).

And now the microblog has done it again, providing a platform for users to discover that the Titanic actually happened.

It all started with a tweet from @charlibobsss who says: “is it bad that I didn’t know the titanic was real? Always thought it was just a film”.

Rather than be lambasted by fellow tweeters for a fairly significant gap in her general knowledge, a series of posts spreading this breaking news follow.

“Nobody told me titanic was real … ? How am I just finding this out?!” posts @lizamagang.

This year marks the 100th anniversary of the Titanic’s ill-fated maiden voyage. The Titanic Belfast Museum has just opened to commemorate the event, as the ship was built in, and set sail from, Belfast.

Perhaps these tweeters might consider a visit to get themselves up to speed on the Titanic’s history, now that they know it isn’t just an elaborate setting for a lame love story between Leonardo DiCaprio and Kate Winslet.

“The titanic was real holy shit im never going on a cruise” tweeted @themilfmadness_. We’re going to go out on a limb and guess this person has never heard of the Costa Concordia.

See the series of “Titanic was real?!” posts here. 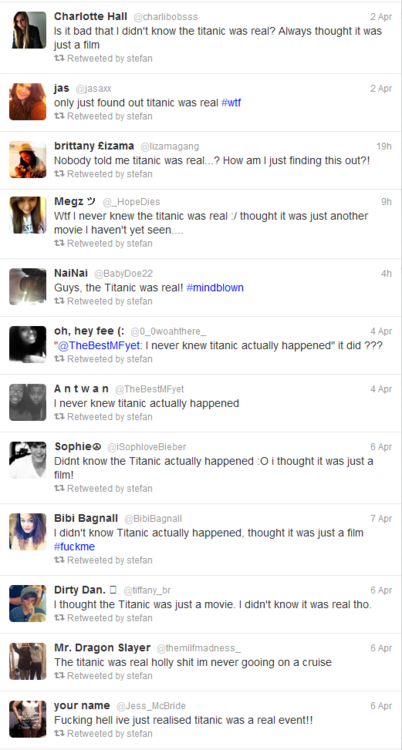