Plain sailing? Off the Isle of Wight coast, TNT battles the bracing waters and blustering winds

Rope in hand, I wait until Sue, our skipper, has brought the boat close to the pontoon and step off, quickly securing the bow line around a cleat. I remember how to tie it in a figure of eight, as I’ve been taught, and everything’s going swimmingly until disaster strikes.

I hear shouts and turn to see crew member Bea has misjudged the distance between the boat and the dock and fallen in. It sounds funny, but the look on Sue’s face tells me how serious this is.

Bea’s at risk of being crushed by the boat or getting hypothermia in the frigid water (it’s springtime in England, meaning flippin’ cold), so there’s no time to waste: Sue directs two of us to try and push the boat away from the dock while two others haul Bea out. Soon she’s thawing under a hot shower on board, while the rest of us take in what happened. Crisis averted – just. 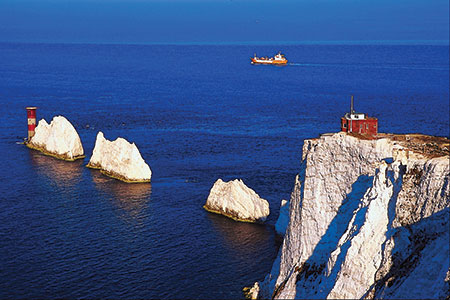 It’s a lesson for us novice sailors about how quickly things can go wrong at sea – one of many things I’m learning on this ‘competent crew’ weekend with Girls for Sail, a women-only yachting company based in Cowes, the small harbour town which every August hosts the biggest annual regatta of its kind in the world.

Before arriving on the Isle of Wight I didn’t even know bow from stern (front and back, since you asked) or port from starboard (left and right), but I’m soon spouting nautical terms like the saltiest of seadogs.

Over the course of two weekends like this, or one five-day trip, total beginners can learn the basics of sailing and pick up an internationally recognised Royal Yachting Association qualification proving competence as a crew member.

I meet Sue and my four fellow crew on Friday evening aboard our yacht in Shepherd’s Wharf Marina and the teaching starts immediately. As we get ourselves comfortable on board (and crack open a bottle of red) Sue gives a safety briefing, telling us how to radio a May Day, put out an engine fire and use the gas cooker on which we’ll cook our meals. 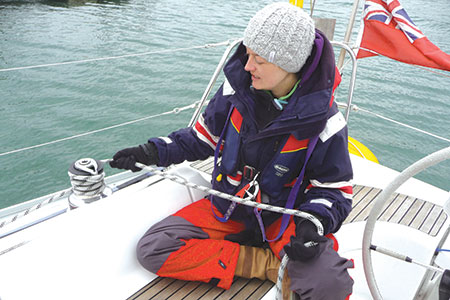 Presciently, she also teaches us what to do in case of man overboard, offering up the unnerving fact that cold water shock can kill in four minutes. I go to bed in my snug cabin feeling more than a little apprehensive of what’s to come.

My worries are blown away the next day by the exhilaration of being on the water. The wind’s a blustery 28 knots and, despite the chill (I’m wearing seven layers), it’s fine sailing weather.

The Solent (the strait separating the Isle of Wight from England’s mainland) is a busy place – we skirt around passenger ferries and tankers, while racing yachts flit past us, their dark sails like shark fins.

It’s literally all hands on deck as we learn to tack the boat, grind in the sails and take turns on the helm (the steering wheel), all the while keeping a lookout to avoid collision – unsurprisingly, that’s the most vital role for a crew member, says Sue. 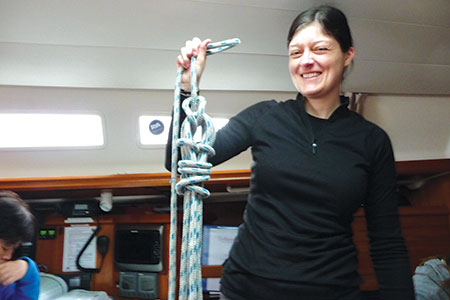 Here and above: The writer learns to tie sailing knots

We end the day on the mainland in Hamble, Hampshire, and after showers, head to the lively King And Queen pub for some quality après-sail.

The whistle of the kettle on the yacht’s stove wakes me early the next morning. Over bacon, eggs and tea Sue teaches us to tie knots and coil ropes, before we don our life vests for another day’s sail. Out in the choppy sea we learn to put down anchor, practice rescuing a man overboard (a buoy stands in for a person in peril) and cram in some theory.

There’s always more to learn, but when we moor for the final time back in Cowes I feel I know what I’m doing – most of the time.

My shins are bruised from clambering about the yacht, my hands are raw from pulling ropes and I’m exhausted, but I can tell you the difference between a reef knot and a clove hitch, I know how to tack and gybe and best of all, I can make a cup of tea at 30 knots in a swaying galley without spilling a drop. Next stop, the high seas… 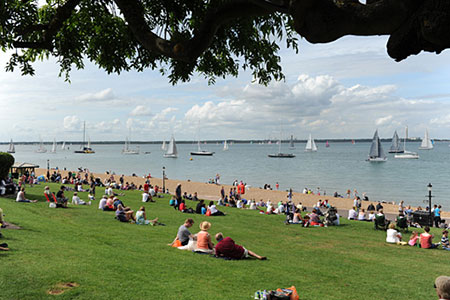 Start your trip with a hearty fry-up at Beatles-themed Cowes institution, Octopus Garden. Its famous all-day breakfast should fuel you for a day’s sail. Full English from £5.25.

If you moor up in pretty Hamble-le-Rice, head to the King And Queen for gastro-pub fare in the spacious beer garden. Mains from £8.95.

A traditional Cowes boozer and a favourite with local sailors, the Anchor Inn is ideal for a post-sail wind-down with its pool table, live music and pints from £3.20.

If wine and cocktails float your boat, head to The Coast, a lively, modern bar and restaurant which is the place to be in West Cowes on weekends. Share a bottle of Merlot for £14.95.

You’ll be well placed to watch the boats go by at the Fountain Inn, right on Cowes quay. En suite doubles from £79pn.

A good budget option is Waverley Park tent and caravan park in East Cowes. Pitch your own tent from £6pppn.

Geting there Take the train from London Paddington to Southampton from £38 return with National Rail. Then take the ferry from here to Cowes from £18.75 return with Red Funnel.

No evidence of aliens says White House but we’re looking